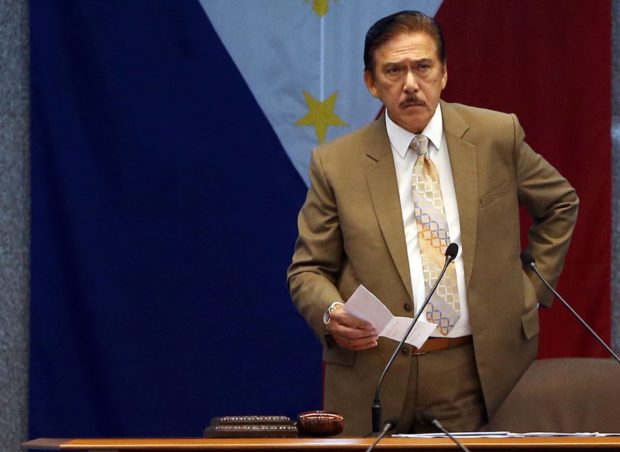 MANILA, Philippines — Senate President Vicente Sotto III on Wednesday said he was confident he would retain his post after meeting with several senators of the incoming 18th Congress.

Sotto and several senators — incumbent, new, and returning — gathered for a dinner hosted by Senator Manny Pacquiao at his home in Makati City.

The dinner was held amid allegations that Sen. Cynthia Villar was being urged to challenge the presidency in the upper chamber.

Asked if he felt confident of retaining his post after the dinner, Sotto’s response was short but telling.

Sotto added: “Our talks were for the retention of the entire leadership and not just the SP [Senate President].”

Also present at the dinner was neophyte Sen. Francis Tolentino, who fellow neophyte Sen. Imee Marcos revealed was the one pushing Villar to challenge the top leadership of the Senate.

Following the incident, Tolentino said he would “abide by the decision of my party,” which is the ruling Partido Demokratiko Pilipino-Lakas ng Bayan (PDP-Laban).

For his part, Sen. Aquilino “Koko” Pimentel III, PDP-Laban president, said the party had not decided on who to endorse as they would still need to consult with the members on the matter.

READ: No decision yet from PDP-Laban on who to back for Senate leadership

Meanwhile, Villar, who was not present at the dinner, had refused to sign a resolution supporting the continued leadership of Sotto, but she denied that it was because she was interested in the post.

Villar said she would want to talk first with her incoming Nacionalista Party mates Marcos and Pia Cayetano before she would sign the resolution.