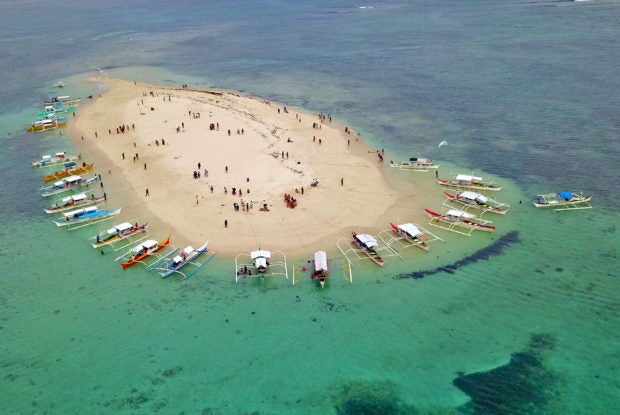 NAKED IN SIARGAO. Tourist boats beached along the coast of Naked Island in the town of General Luna, Siargao Island in Surigao del Norte. Naked Island is one of the most visited tourist destinations in Siargao, peaking at 300 to 500 visitors a day. PHOTO by Erwin M. Mascariñas

SURIGAO CITY – A tourist was killed and four others were injured after lightning struck one of the most visited islet sandbars off the coast of General Luna town on Siargao Island on Sunday.

Police investigation suggested that the tourists were sitting on the beach and taking selfies when the lightning struck.

“This group of tourists did not come to the island together or as a group, they were enjoying the beach, taking photos and selfies. Then the lightning struck, injuring five of them. Right away, they were rushed to the district hospital in the town of Dapa,” said Police Major Joel V. Liong, station chief of General Luna municipal police station.

At the Dapa District Hospital, Lee Christian Ragosta Zamora from Tagbilaran City in Bohol was declared dead by attending physicians.

Liong pointed out that Naked Island is part of the three-island tour most tourists take when visiting the surfing town of General Luna.

“Everyday tourists flock to the islands of Naked, Daku, and Guyam as part of the island-hopping package tour,” said Liong. “It was just unfortunate that the lightning struck the island and most of those injured were wet after swimming,” he added.