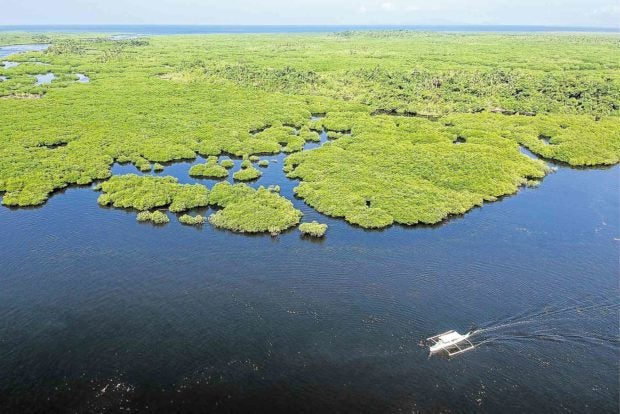 MANGROVE PARADISE The 4,000-hectare mangrove stand in Del Carmen town on Siargao Island in Surigao del Norte province is among the largest in the Philippines. This patch hosts 44 species of mangroves, according to local officials. —ERWIN MASCARIÑAS

DEL CARMEN, Siargao Island, Philippines — Alarmed by the resurgence of commercial trawling activities here, local officials and nongovernment organizations are calling for the national government’s support in the fight against illegal fishing.

Mayor Alfredo Coro II said his town would need the backing of the Bureau of Fisheries and Aquatic Resources and the maritime unit of the Philippine National Police to stop commercial trawlers from encroaching into municipal waters.

“Illegal fishers in our municipal waters are armed and dangerous. [Stopping them] is already beyond the capacity of the … local government and our Bantay Dagat (sea patrol) team,” Coro said.

“We are requesting support from national government agencies to help us curb illegal commercial fishing activities now [monitored] in the area of Halian Island since the past local government operations against ‘liba-liba’ resulted in armed confrontations,” he added.

Lawyer Gloria Estenzo Ramos, vice president of Oceana Philippines, said commercial fishing operators had been emboldened by their knowledge that the government lacked vessels and monitoring systems to track them.

“We call on law enforcement agencies to intensify their efforts to arrest and file cases against these illegal fishing operators since they have the mandate and assets to do so,” Ramos said.

“Monitoring, control and surveillance mechanisms all over the country should be strengthened or we will have no more fish to feed our families despite being an ‘archipelagic’ country,” she said.

“It has always been our stand that it should be the small fisherfolk who should benefit from the marine resources [in the municipal waters] and not the large commercial fishing boats,” said Wendie Entendez, field manager of Sikat Inc. Siargao field office.

Gina Barquilla, municipal environmental resource officer of Del Carmen, said her office first monitored the commercial trawlers on May 21 and 22 from passengers traveling by boat from Surigao City.

“On May 23, we received another report from the area and together with our Bantay Dagat, we confirmed, photographed and took video of the trawlers,” Barquilla said.

“We were alarmed since we were not only dealing with one trawler here but as many as three [trawlers] were seen from May 24 to May 26,” she said.