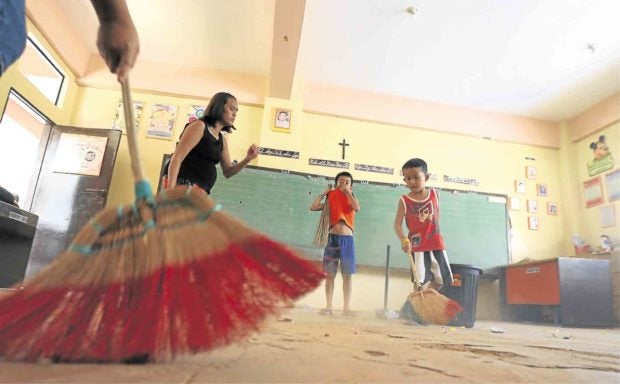 Paint has failed to cover the cracks on the classroom walls of Ucab Elementary School in Itogon town, Benguet province, that has been declared a “critical danger zone” by the Mines and Geosciences Bureau (MGB).

The school was found susceptible to landslides and ground shaking when triggered by earthquake or heavy downpour, MGB officials warned.

Despite the risk, teachers have already made all the necessary preparations to make the classrooms functional as they welcome back students on Monday.

“Fear is there but we have been assured that as long as the cracks are not on the beams and posts, it is still safe,” Josephine Palitayan, who has been teaching in the school for 28 years, told the Inquirer.

The assessment was made after landslides triggered by Typhoon “Ompong” (international name: Mangkhut) killed 89 people in Itogon.

Among those killed were two pupils of Ucab Elementary School who were buried when a massive landslide swept a miners’ bunkhouse and several shanties half a kilometer from the school.

Nerissa Barbosa, disaster risk reduction and management coordinator of the Department of Education (DepEd) in Benguet, said no relocation sites for these schools had been identified so far.

She said school principals were permitted to suspend classes during heavy downpour while two-shift classes could be held in safer buildings.

In Baguio City, the Department of Trade and Industry has partnered with a local department store to give discounts for school supplies as classes begin.

In Dagupan City, teachers will engage their students in nontraditional teaching modules as schools there follow the so-called “Happy Schools Movement” prescribed by the DepEd in Ilocos region.

Venus Maria Estonilo, officer in charge of the curriculum, said the movement was initiated by Dr. Malcolm Garma, DepEd director in Ilocos region, with each school division tasked to come up with its own teaching strategies. These strategies include cooperative learning, storytelling and play-based learning.

In Bataan province, the SM Prime Foundation on Friday turned over a two-story building with four classrooms to Balanga Elementary School at Barangay Talisay in Balanga City.

In Laguna province, about 200 public school children in Los Baños town got their hair cut for free in time for Monday’s school opening.

Janos Lapiz, Barangay Batong Malake head, said they had been offering free haircut to children for the last five years. “We took the barbers to the communities so people won’t have to go to the village hall anymore,” he said.

Lapiz said the program had been replicated in the villages of San Antonio, Malinta, Bayog and Bambang in Los Baños.

Zero fee
In a remote village at the border of Davao City and Cotabato province, more than 300 school children will enjoy not only free school supplies but will also get free meals and tuition this school year.

Rowel Oyong, principal of Katipunan Elementary School (KES) at Arakan town in North Cotabato, said school bags, supplies, slippers, raincoats and hygiene kits were already provided for, thanks to the partnership of the school and Davao Eagle Club, Kan Kon Chi Development Corp. and village officials who donated these materials to the children.

The school has implemented a zero collection of school fees and other contributions from parents throughout the school year. Even the school identification cards are given by the school to the pupils for free, complete with the pupils’ pictures, said Oyong.

Since 2016, KES has been implementing the adopt-a-child program where a sponsor supports a pupil until Grade 6.

To ensure that pupils will not drop out of school, KES provides supplemental feeding especially among malnourished pupils and those who are at risk of leaving due to food insufficiency.—Reports From Karlston Lapniten, Kimberlie Quitasol, Yolanda Sotelo, Leilanie Adriano, Greg Refraccion, Williamor A. Magbanua, Divina Suson And Maricar Cinco

TAGS: Back to School, school opening 2019