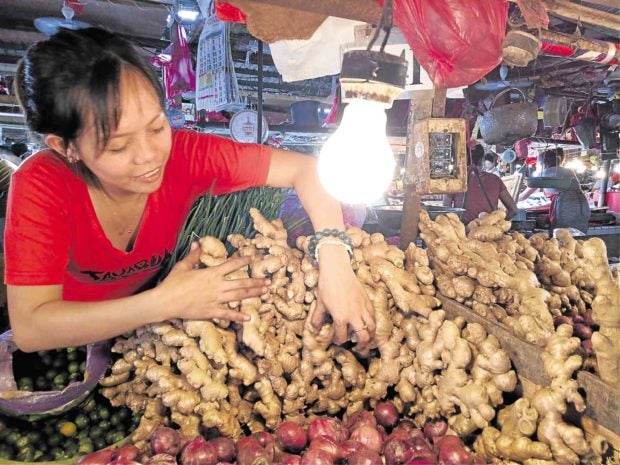 PRECIOUS SPICE Ginger sells for P180 a kilo in Kidapawan City due to a supply shortage. —WILLIAMOR A. MAGBANUA

KIDAPAWAN CITY, Cotabato, Philippines — Prices of ginger and tomatoes, the leading agricultural products of Cotabato province, have soared amid the long dry spell, an agriculture official said on Sunday.

Marisa Aton, acting city agriculturist, said the supply of tomatoes and ginger sold in this city’s market had dwindled because upland farms had been devastated by the drought accompanying the El Niño weather phenomenon.

“The upland areas of the city dried up affecting at least 10 hectares of tomatoes and ginger plantations, which contributed to the shortage of [these] products in public markets,” Aton said.

As a result, the average price of ripe tomatoes had shot up to P90 a kilogram, more than double the P40 a kilo price from January to March.

Ginger, on the other hand, is sold for P180 a kilo, up from P80 a kilo during the first quarter. Market vendors in nearby Digos City sell ginger for P200 a kilo, reports said.

Aton said some farmers did not plant ginger and tomato in the past months due to the drop in buying prices following a glut during the previous planting season.

“In the first quarter, these products flooded the market, affecting their prices. But some farmers opted not to plant and abandoned their plantations for fear of losing their investment,” Aton said.

She said vendors here had turned to nearby Tulunan town for their supply, paying P120 for a kilo of ginger, and P50 for a kilo of tomato. —Williamor A. Magbanua