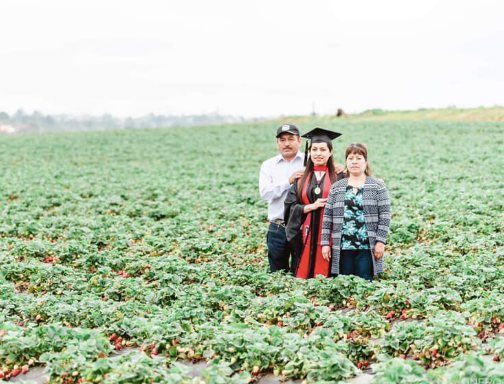 Erica and her parent pose in the middle of a strawberry field. Image: Facebook/Erica A Alfaro

A young woman from California, United States returned to the fields with her immigrant farmer parents days before she received her Masters in Education from university.

Twenty-nine-year-old Erica Alfaro proudly posed in the middle of a strawberry field in Carlsbad with her parents to mark her educational journey. As per 10News on May 17, Alfaro graduated from the San Diego State University with her master’s degree on May 20.

But there are stories that pictures cannot tell, such as Alfaro’s harrowing experience of being a mother at just the tender of 15 with an abusive partner.

“I was a teenage mom. My baby’s father forced me to sleep outside with my baby,” she said in the report. “That is the night I decided to go back to school.”

Alfaro was born in Fresno, California, but her parents are Mexican immigrants and cannot read nor write. She did her schooling in Tijuana, Mexico, and at 13 years old moved to Oceanside where her parents got a job as farm workers, as per report.

It was her son, Luis, who inspired her to return to school, finishing high school through home schooling and then proceeding to junior college right after. In 2012, however, Luis was diagnosed with cerebral palsy, prompting Alfaro to drop out of college.

“I had so many excuses to give up,” she added, as she remembered what her mother said in the tomato fields. “But giving up was never an option.”

She eventually completed her bachelor’s degree at California State University in San Marcos. And today, she can proudly say she is also a master’s degree holder, having conquered all.

“My son represents a new generation,” she said of Luis, who is now 13-years-old. “He will have a better future. He will have more opportunities, and I will be there to tell him that it is possible. That he belongs. All those things I never heard myself.” Cody Cepeda/JB