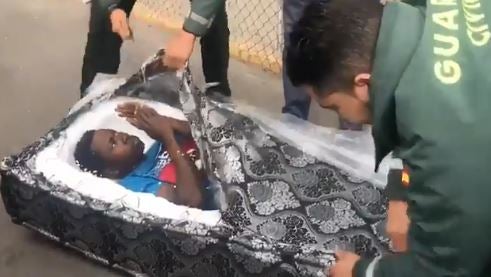 Border officers recently discovered African migrants hidden inside mattresses in an attempt to reach Europe, at a check-point between Melilla and Morocco. The scene was shared on social media last Dec. 30 by Spanish senator Jon Inarritu and showed the authorities hauling two plastic-wrapped mattresses from the roof of a white van.

In the video, the officers can be seen tearing off the plastic  wrapping before cutting the mattress open with a knife, revealing a young man lying inside. Another young man emerges from the other mattress, looking dazed.

“As long as there are no safe routes to request asylum, situations like this will continue to occur in the southern border of Europe,” tweeted Sen. Inarritu, as reported by The Mirror on Dec. 31, 2018.

The driver of the van allegedly fled to Morocco before the officers could arrest him, the report stated. Meanwhile the young men, suspected to be sub-Saharan, were found in good health and did not need medical assistance.

The discovery was made after Home Secretary of the United Kingdom Sajid Javid recently declared the rising number of migrants crossing the English Channel as a “major incident.” The  declaration came to light after the number of migrants who attempted to go across the Channel rose to almost a hundred during Christmas Day alone.

Javid cooperated with border officials, Immigration Enforcement and the National Crime Agency in response to the rising number of migrants attempting to cross the English Channel during the holidays. As per the report, Javid also made an urgent call to France regarding their joint efforts of tackling the migrant crisis. Cody Cepeda/JB