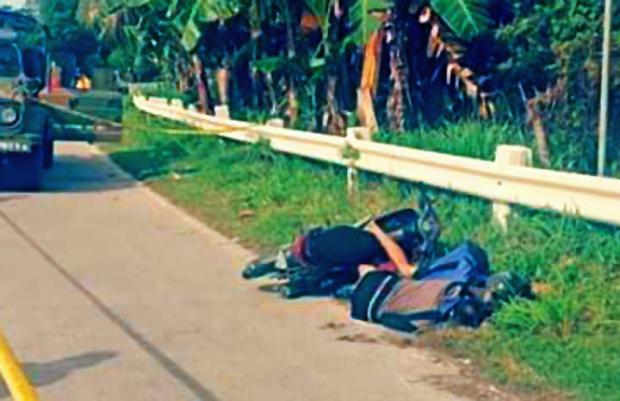 Two Army applicants lie dead after being gunned down on a highway in Rebuken, Sultan Kudarat, Maguindanao. (Photo from the Sultan Kudarat Municipal Police Station)

COTABATO CITY, MAGUINDANAO, Philippines – Four were killed, two of them applicants to the Philippine Army, in separate gun attacks in Maguindanao over the weekend, police here said.

On Sunday, at past 1 p.m., two men on a motorcycle were waylaid by still unidentified gunmen aboard another motorcycle in Barangay Rebuken, Sultan Kudarat town in Maguindanao.

They came from Cotabato City and were on their way to their hometown in Parang, Maguindanao when attacked. Both died on the spot after being shot several times in different parts of their bodies.

According to their relatives, the two were processing their papers for enlistment in the Army at Camp Siongco, the headquarters of the 6th Infantry Division, in Awang, Datu Odin Sinsuat, Maguindanao.

On Saturday, about 4:30 p.m., two transient vendors of eggs, canned goods and vegetables were gunned down aboard a tricycle at Barangay Tukanalipao, Mamasapano town in Maguindanao.

According to Esmael Hashim, chairman of Barangay Tukanalipao, the victims were from Barangay Magon, Tantangan, South Cotabato.

Officials ruled robbery out as a motive since the victims’ daily income and other valuables were intact.

Police have turned over their remains to the Tantangan Municipal Police Station on Sunday.