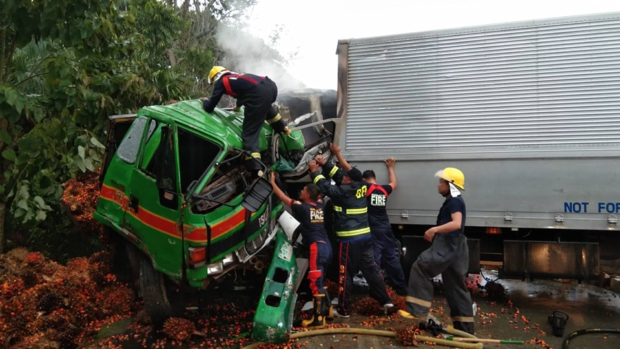 Firefighters try to pull out the driver of an Isuzu dump truck following a three-vehicle smashup in Isulan, Sultan Kudarat on May 20, 2019. CONTRIBUTED PHOTO from BFP-Isulan

ISULAN, SULTAN KUDARAT — A truck driver was killed while two other drivers were injured in a three-vehicle smashup along the national highway here on Monday.

Capt. Jonathan Gazo, chief of the Isulan Central Fire Station, said two of the vehicles went on fire after the collision at past 6 a.m. in Barangay Mapantig, a village bordering Isulan and Esperanza towns.

Police Executive Master Sgt. Elmer Segura, investigator of the Bureau of Fire Protection (BFP) in Isulan, said Rene Aporada, a resident of Esperanza town and the driver of Isuzu dump truck, was killed after the truck he was driving collided head on with the Isuzu wing van, which went ablaze upon impact.

Traffic investigators said the dump truck was heading toward Isulan town from Esperanza when it overtook the Toyota Townace passenger vehicle and collided head-on with the Isuzu wing van heading towards the opposite direction.

Due to the impact, the wing van and the passenger jeep went on fire.

Aporada was pinned in the blazing truck, causing his death while Isuzu wing van driver Nilo Cabuhay and Andal Usop of Mamasapano, Maguindanao and the driver of Townace were injured. (Editor: Eden Estopace)