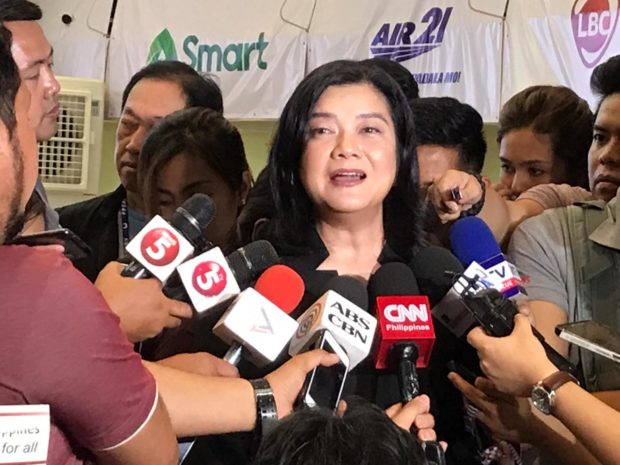 PPCRV Chairperson Myla Villanueva during an ambush interview on May 20, 2019. PHOTO by Noy Morcoso/INQUIRER.net

MANILA, Philippines — The Parish Pastoral Council for Responsible Voting (PPCRV) confirmed Monday that the server experienced ’bottleneck’ after election results were transmitted for the first time last May 13.

On May 13, following the initial release of only about 0.3 percent of the total votes cast, there was a seven-hour delay in the PPCRV’s and media outlet’s tally boards.

This led the poll watchdog to request for the transparency server’s audit logs to check its activity before and during the time of the delay in updating the tally boards.

Was data coming in?

Did the data match with the Comelec’s central server?

Since it was confirmed that the data was coming in, PPCRV checked if the transmitted data matched with Comelec’s central server.

“We took it upon ourselves to create a script that will allow our IT experts to get the data from the public Comelec server and consolidate and match it with the data we received in the transparency server,” Villanueva said.

“We would like to tell the public that it matched,” she added.

Was there a ‘bottleneck’ during the delay?

“When we looked at it, we saw that there was a job, the job it needed to get done to transfer the data to us and that file transfer manager was not completing the job,” Villanueva said.

“It started but it did not complete and that is a cause of a bottleneck,” she added.

This, Villanueva said, resulted in the delay in updating the PPCRV and media outlets’ servers despite the continuous transmission of election results.

Asked if there was fraud in the elections, as many speculate, Villanueva said that they are not in a position to explain the root cause of the problem, so they asked the Comelec to explain what is wrong with the file transfer manager since the commission is the one handling the application.