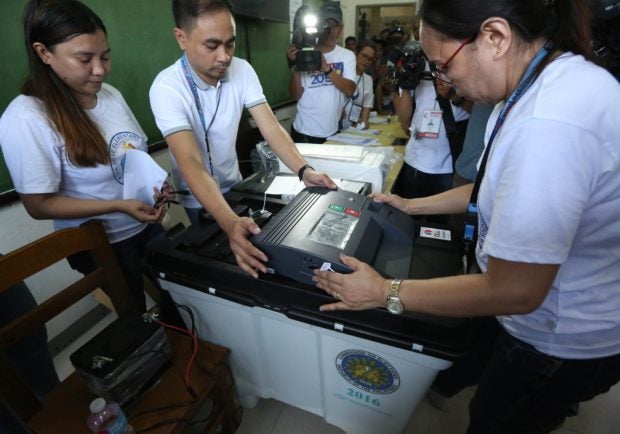 ONE OF MANY MALFUNCTIONS A defective vote counting machine is replaced in a polling precinct at San Jose Elementary School in Makati City during midterm elections on Monday. —MARIANNE BERMUDEZ

MANILA, Philippines — The Commission on Elections (Comelec) offered on Tuesday an explanation for the glitches in the transparency server and vote counting machines (VCMs), which one senator said could fuel doubts about the results of midterm polls that shut out the opposition.

Election Commissioner Marlon Casquejo said the unofficial count was delayed after the application for pushing out the results from the Comelec transparency server to third-party organizations suffered a glitch on Monday shortly after the voting ended at 6 p.m.

Casquejo said at a press briefing that the seven-hour delay in transmitting voting data to Comelec transparency and media servers was a case of “bottleneck.”

He noted how the system involving the Comelec transparency server and the data being sent to media networks got overwhelmed by the deluge of transmitted results.

Senators demanded an explanation for the glitches in the transparency server and VCMs during midterm polls on Monday.

Senate President Vicente Sotto III is not waiting for an explanation and is instead calling on the Comelec to consider getting a new provider of VCMs.

“It’s about time we stop using Smartmatic,” Sotto said, referring to the company that has been providing the machines since the country switched to an automated system in 2010.

Malacañang, for its part, called on the Comelec to review its contract with Smartmatic.

Presidential spokesperson Salvador Panelo said “there must be something wrong” if hundreds of VCMs had glitches during the elections.

“We suspect it’s the low quality of the SD cards,” he said.

An SD card stores the encrypted image of ballots fed into counting machines.

He also said that the VCMs could be already “old,” noting that the counting machines were the same ones leased for the May 2016 elections.

Sen. Aquilino Pimentel III said he would convene the joint congressional oversight committee on the automated election system, which he chairs, when Congress resumes session.

Pimentel disclosed his decision when asked about delays in the Comelec transparency server’s transmission of results, which set back the unofficial tallies on the senatorial race conducted by media organizations and election watchdogs.

Sen. Francis Pangilinan, president of the opposition Liberal Party, said the Comelec should come up with a clear explanation for what had happened to the transparency server.

“The public’s concerns and doubts about the true results of the election just grew because of your silence. Are you (the Comelec) cooking up something that the public must not know?” Pangilinan said in a statement on Tuesday.

Another error early Tuesday caused a dip in the transparency server results.

Casquejo said this was merely a “java app error” that affected all media networks and organizations getting data from the transparency server. “It was corrected again by just turning it off and on, or reset.”

The problems in the Comelec transparency server have since been resolved on early Tuesday morning.

He said this was because the Comelec had to follow the government procurement law in looking for suppliers.

The law requires government agencies to accept the lowest bid for a product or service that they need as long as the supplier meets the requirements.

While Smartmatic submitted a bid to supply the SD cards at P71 million, it lost in the bidding because the Comelec went for the lowest bidder of P29 million.

Casquejo noted that the Comelec had an approved budget of about P80 million for the SD cards. “So what do we expect from SD cards worth P29 million?”

Comelec Chair Sheriff Abas said he had ordered a review of the poll body’s contract with suppliers of the corrupted SD cards and other election paraphernalia to determine if they could be penalized for the glitches.

Abas was referring to the 1,665 corrupted SD cards that delayed voting in many areas across the country and some 1.2 million marking pens that had to be replaced days before May 13 after incidents of blotting pens were reported.

The SD cards were supplied by the joint venture of S1 Technologies Inc. and Silicon Valley Computer Group for a contract price of P22.6 million.

The marking pens and ballot papers were provided by Triplex Enterprises at a cost of P153.8 million.

Unlike in the 2016 elections when the Comelec used bundled materials from technology supplier Smartmatic, this year’s polls use SD cards, markers and papers from different suppliers, according to Abas.

The Comelec decided to buy the VCMs for the 2019 polls, which left it with the option to buy the other election materials from different suppliers.

“The supplies don’t match but we couldn’t do anything because of the procurement law,” Abas said.

Abas said 961 VCMs broke down on Monday. These were replaced but nonetheless caused delays in the voting process.—With reports from Julie M. Aurelio and Marlon Ramos