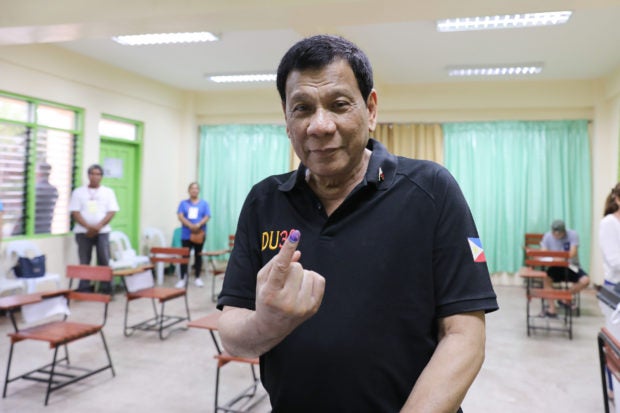 Preliminary results comprising 94 percent of returns from Monday’s vote showed at least eight candidates endorsed by the President leading the race for 12 seats in the 24-member Senate.

Monday’s midterm vote is seen as a gauge of public support for the President, who is midway through his single six-year term.

His deadly crackdown on illegal drugs, unorthodox leadership style, combative and sexist joke-laden outbursts, and contentious embrace of China have been the hallmarks of his presidency.

The dominance of his allies shown by the vote’s results indicate growing support for the President and broad public endorsement of his controversial rule.

Official Commission on Elections (Comelec) results were expected to be declared in about a week.

Those leading included the President’s former national police chief, Ronald dela Rosa, who led the President’s brutal war on drugs, a campaign that had left more than 5,200 suspects dead and drawn international condemnation.

The President’s three children were also expected to win the races for mayor, vice mayor and a congressional seat representing their hometown, Davao City.

The 74-year-old President first carved a reputation as an extra-tough mayor of Davao who hunted drug addicts and criminals on a Harley Davidson motorcycle and carried the nickname “Duterte Harry,” after the unorthodox San Francisco police officer portrayed by Clint Eastwood.

“The overwhelming majority of the electorate have responded to the call of the President to support those whom he said would help pass laws supportive of his goal to uplift the masses of our people and give them comfortable lives,” Panelo said.

Manila-based analyst Ronald Holmes, however, said that except for Dela Rosa and the President’s longtime aide, Bong Go, who entered politics for the first time without their own established bases of support, other leading administration senatorial contenders earned votes based on their own political track records.

The flipside of the President’s perceived endorsement strength was the weakness of the opposition ticket and its campaign, said Holmes, who heads Pulse Asia, an independent pollster that predicted the dominance of the President’s senatorial candidates.

In a statement, Panelo said the “victory of the administration’s candidates” and the shutout of the opposition Otso Diretso contenders sent “a strong message that our people yearn for stability and continuity of the genuine reforms that the administration started.”

The Palace thanked the Filipinos “for expressing their will in the strongest and unequivocal manner.”

The midterm results leave the opposition in tatters and change the dynamic of a Senate that has traditionally been a vital check on state power and a bulwark against the kind of political dominance that the President is demonstrating.

The President is expected to retain control of the House of Representatives also.

Sen. Francis Pangilinan, president of the Liberal Party and Otso Diretso campaign manager, said the fight wasn’t over as 3 million votes remained to be counted.

“About 7 percent of [the] votes, or 3 million votes, are still to be counted in the unofficial tally. Let’s wait for the final results and remain vigilant. Perhaps the remaining 7 percent will still [lead to a] win [by] one or two of our candidates,” Pangilinan said.

Reelectionist Sen. Aquilino “Koko” Pimentel III, dropped from the administration coalition’s lineup on the eve of the vote, broke into the winning circle on Tuesday, clinching the 11th spot.

For political analyst Victor Manhit, there was nothing surprising about the midterm results.

He said Filipino voters leaned toward popular candidates whom they perceived could help them.

One such candidate in Monday’s elections is the actor Lito Lapid, who had served as governor of Pampanga province and been a senator, serving two terms.

Lapid is poised to win his bid for a return to the Senate, firmly in the seventh place in the unofficial results.

He is likely to join the majority in the Senate to boost the President’s legislative agenda, including the restoration of capital punishment and rewriting the 1987 Constitution for a shift to federalism, which some critics fear is a cover for removing term limits.

But two professors on Tuesday said the dominance of the President’s allies did not necessarily mean smooth sailing for his legislative priorities.

Dean Ronald Mendoza of Ateneo School of Government noted that even some members of the ruling majority expressed “deep reservations” about federalism.

Professor Jean Encinas-Franco of the University of the Philippines political science department said the plans of some senators to run for higher office in 2022 could make them keep a safe distance from the administration.

Mendoza recalled Congress’ failure to pass the 2019 budget on time, saying it was an indication that the supermajority did not always do the President’s bidding.—Reports from Julie M. Aurelio, DJ Yap, Jeannette I. Andrade, Jovic Yee, Patricia Denise M. Chiu and AP

Read Next
Comelec blames ‘bottleneck’ for 7-hour server delay
EDITORS' PICK
Diokno to Duterte: OK to make fun of buck tooth, but focus on people’s needs first
10 Filipinos positive for COVID-19 in UK, 7 in Ireland — envoy
IATF to LGUs: Issue ordinances vs attacks on frontliners, COVID-19 patients
Robredo spox thanks Duterte for defending VP’s efforts vs COVID-19
Quick chat with Nicole Andersson: ‘You really don’t need much to be happy’
Nograles: Cabinet members to donate 75% of monthly salary to aid COVID-19 fight
MOST READ
Coronavirus hotbed Rizal to shut borders on April 6
Sen. Migs Zubiri’s wife recounts lessons from the COVID-19 ordeal
Government in no rush to end Luzon lockdown
Sotto on Isko Moreno’s call: We do our job without the media following our every move
Don't miss out on the latest news and information.