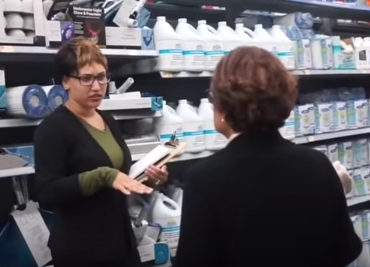 A YouTuber’s prank of pretending to be Walmart’s CEO and firing employees has backfired after it left one cashier in tears.

Vlogger Lauren Love, who has over 140,000 subscribers on YouTube, decided to prank the employees of a Walmart in Richmond, Texas, by dressing up as an executive and pretending to fire employees from their jobs. Her prank took a wrong turn, however, after it reduced one employee, Filipino Maria Leones, to tears.

Leones, who has been working in Walmart for six years, moved to the United States from the Philippines to be closer to her children and grandchildren, as per NBC affiliate Click2Houston on May 8. Love’s video “CEO Firing People Prank”, which she uploaded on YouTube last April 23, showed her going up to Walmart employees and telling them to hand in their badge and vest for not doing a good job.

The video has since been taken down from YouTube, but clips of it continue to circulate on social media. In the video, Love can be seen approaching Leones in the gardening section, asking her what shift she was in. Leones said she is working the 9-to-6 shift and was assigned in the cashier.

“Oh you’re in the cashier, so wait why are you here?” said Love.

“I don’t have… when we have no customers, then they ask us also to do something…” explained Leones.

Love then proceeded to tell Leones she was the CEO and that her father used to own this certain Walmart branch.

“You’re fired because I don’t appreciate you walking around here. You’re supposed to be at the cashier, cashing people out,” said Love. “What if someone was looking around and they don’t see you because you’re busy over here?”

She then told Leones she can find a different Walmart to work in and that her discharge papers would be handed to her by the manager. Leones stutters for a while, before telling Love she had been working at Walmart for six years

“I have been here for six years… and I’ve been doing my job very well… and I’ve been regarded as employee of the month…” Leones tried to say, before finally breaking down into tears.

Love then broke out of character and apologized to the crying Leones, telling her she was not fired at all. It seems the damage has been done, however, as Leones later shared in the report how the prank left her feeling little and powerless.

“Really, I was really so crushed. I felt so little, I felt so powerless,” she said in the report. “At that very moment, I felt so little because back home I had a very good reputation because I’m a professor.”

Leones added all she could think about was her husband of 43 years who recently underwent a quadruple bypass due to a heart attack. Her job at Walmart apparently covers his medical expenses, which was why she was so distraught from the prank.

Walmart has since banned Love from all their chains following the incident and has called on YouTube to remove the video from its site.

“This prank is offensive and the people responsible are no longer welcome in our stores… Our associates work hard every day to serve our customers,” the grocery chain said in a statement. “They do a fantastic job, deserve better than being subjected to such disrespect, and will continue to have our full support.”

Love on the other hand has taken to her YouTube to apologize for the incident, saying she is “only human.” Cody Cepeda/JB