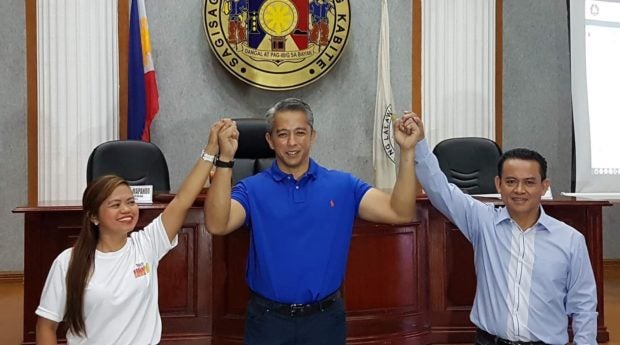 Jonvic Remulla proclaimed as Cavite governor on May 16, 2019. Photo by Dennis Abrin

The Commission on Elections (Comelec) Thursday morning proclaimed Remulla winner with 825,485 votes. Maliksi of the Liberal Party finished with 495,288 votes.

Days before the election, a petition for disqualification was lodged against Remulla over alleged vote-buying.

He denied violating the election rules and said the money involved was meant for the transportation allowances of his campaign volunteers.

In 2016, Remulla was replaced by his brother, Jesus Crispin “Boying” Remulla, when he became the spokesperson for former Vice President Jejomar Binay.

Midway during the presidential elections, the Remullas shifted from the Binays and supported President Duterte.

Boying won as congressman of Cavite’s seventh district and his son, Crispin Diego, a provincial board representative. (Editor: Leti Boniol)