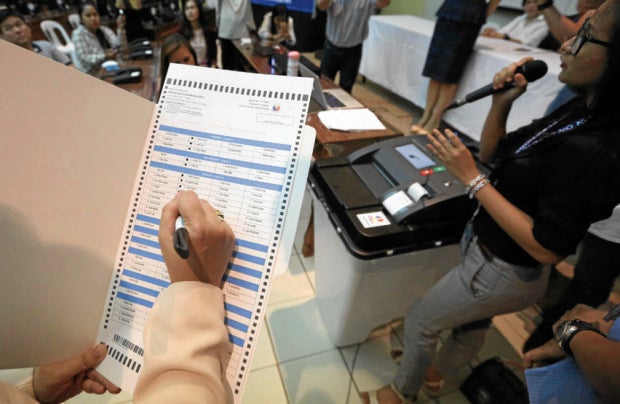 May 3, 2016
Parish Pastoral Council for Responsible Voting (PPCRV) inaugurates the electoral watchdog’s Command Center at the Pius XII Catholic Center Complex in Manila, with a demonstration of the VCMs as the National elections comes to a near.
INQUIRER FILE PHOTO / MARIANNE BERMUDEZ

“I think that they should open it to all bidders that have global experiences,” PPCRV chair Myla Villanueva said in an interview at the watchdog’s command center.

A total of 961 VCMs and 1,665 SD cards suffered glitches during the Monday midterm elections, the Comelec said Tuesday, adding that 1,253 SD cards had already been replaced.

The joint venture of S1 Technologies Inc. and Silicon Valley Computer Group supplied the SD card for a contract price of P22.6 million, while the pens and ballot papers were provided by Triplex Enterprises at a cost of P153.8 million. Government procurement laws require agencies to prioritize the lowest bidder that satisfied the bid requirements.

Villanueva meanwhile bucked proposals to go back to manual voting. She called it a “backward” step from solving the problems during elections.

“I am sure in my instinct that we still want automation but we also need to make sure that all options are considered… It’s moving backward in time instead of forward in time looking for better solutions,” she added.

READ: Comelec to go after suppliers of faulty VCMs, SD cards after proclamation