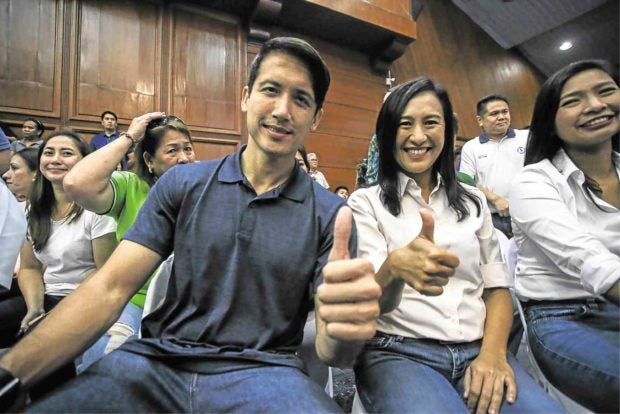 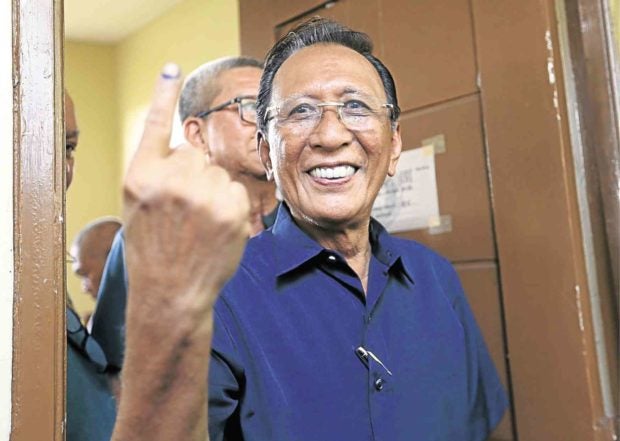 In the cities of Caloocan, Malabon and Valenzuela, all incumbent mayors won their reelection bids. Navotas’ next local chief executive, meanwhile, is the current House representative.

Oreta, a Liberal Party bet, became mayor of Malabon in 2012 when his uncle, Tito Oreta, died in office.

His running mate, Maca Asistio, was unopposed and finished with 369,790 votes.

Malapitan’s son, Dale “Along” Malapitan, who was also the lone candidate in the first district’s congressional race, got 278,441 votes.

There was no surprise in Valenzuela City when Mayor Rexlon Gatchalian was reelected with a big margin. He garnered 249,508 votes, while opponents Bong Go and Bien Español trailed with 6,239 and 2,288 votes, respectively.

“This is the biggest mandate given to me. It’s overwhelming to see I have reached the 200,000 mark,” Gatchalian said in a phone interview moments before he was proclaimed by the City Board of Canvassers at 12:20 a.m. on Tuesday.

Incumbent Vice Mayor Lorie Natividad-Borja was also reelected, being the only candidate for the post, with 226,091 votes. Gatchalian’s councilors were also unopposed and his local ticket, Tayo Na, Valenzuela, finished at 16-0.

Valenzuela Rep. Eric Martinez was successful in his reelection bid as second district representative. He garnered 106,848 votes, compared to Magi Gunigundo who had 37,935 votes.

His brother, Wes Gatchalian, was unopposed as first district representative. He got 119,991 votes.

Navotas will also remain in the hands of the Tiangco brothers after Rep. Tobias “Toby” Tiangco led the mayoral race with 78,778 votes, followed by Councilor Dan Israel Ang with 33,216 votes.

Tiangco was city mayor from 2000 to 2010 before he bagged the city’s lone congressional seat. Incumbent Mayor John Rey Tiangco, who is on his last term, won the congressional seat with 80,265 votes. Opponent Marielle del Rosario, a former ally in the 2016 polls, followed with 30,050 votes.

“Team SBP, let’s start cleaning up today. Elections are over.”

This was the message posted by Serbisyo sa Bayan Party’s Joy Belmonte on her social media account just before her proclamation as Quezon City’s new chief executive.

After almost 16 hours of canvassing at the Carlos Albert Session Hall in city hall, the Board of Canvassers officially declared Belmonte as the duly elected mayor of Quezon City, garnering 54.08 percent of 907,912 total votes recorded.

Belmonte has served as vice mayor for three consecutive terms under the Liberal Party, before forming her own local party which is affiliated with Sara Duterte’s Hugpong ng Pagbabago.

In the final tally released by the BOC, Belmonte beat Crisologo with a lead of 103,265 votes. She maintained her advantage all throughout the canvassing, with a final tally of 469,480 over Crisologo’s 366,215 votes.

Her running mate, Councilor Gian Sotto, clinched the city’s second highest post with 382,393 votes. But unlike in the mayoral race, it was a close call with PDP-Laban’s Jopet Sison, who garnered 343,473 votes.

The Belmonte-Sotto tandem had a simultaneous proclamation around 9 a.m. on Tuesday, right after the winners in the congressional and city council races were declared.

The canvassing had reached the 98-percent mark shortly after midnight, but it was derailed for several hours when barangays, notably in Districts 1, 5 and 6, experienced difficulties in fully transmitting the votes from their precincts.

The incumbent mayor, Antonino Calixto, will take over his sister’s post as congressman of the city’s lone district with 136,519 votes.