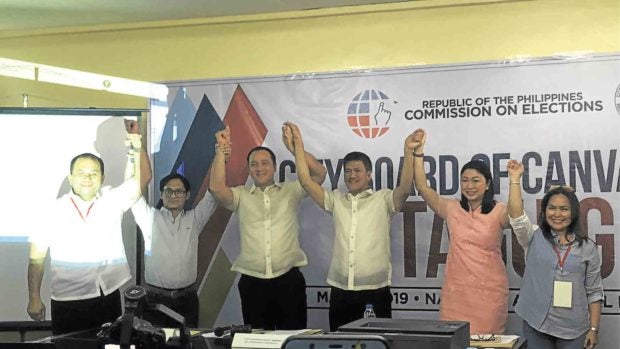 STILL THE VOTERS’ CHOICE The Taguig City Board of Canvassers proclaim (from left) Lino Cayetano as mayor-elect, Ricardo Cruz Jr. as vice mayor-elect and Lani Cayetano as congresswoman-elect in the second district. —KRIXIA SUBINGSUBING

MANILA, Philippines – As voters in Pasig and San Juan booted out the dynasties that had held power for decades, Taguig residents elected three members of the Cayetano family to the city’s top posts.

Spouses Lani and Allan Peter Cayetano of the Nacionalista Party won overwhelmingly over their opponents in the congressional races while Alan’s brother, Lino Cayetano, secured the mayoralty.

In the city’s first district, Alan led by a margin of 30,000 votes over PDP-Laban candidate Allan Cerafica while Lani had an edge of more than 70,000 votes over her rival, Cheche Gonzales, in the second district.

Lino, on the other hand, won handily by more than 63,000 votes over his opponent, Arnel Cerafica.

The city also voted for Lino’s running mate, Ricardo Cruz Jr., as vice mayor while all eight of their councilors clinched a spot in the Sangguniang Panlungsod.

As of Tuesday afternoon, only Lani, Lino and Cruz had been proclaimed by the city board of canvassers since a defective SD card needed to be decrypted before Alan’s win could be formally declared.

Alan, who served as foreign secretary under President Duterte, said their victory was a chance to dispel the notion that political dynasties were inherently bad.

“These days, it’s all about dynasties. But to be fair, there are also dynasties of good governance and performance,” he stressed.

Taguig has always been his family’s bailiwick. Under their leadership, the upscale commercial-residential districts of Bonifacio Global City and McKinley Hill were developed.

Addressing their opponents, Alan urged them to heed the voice of the public.

“The people have spoken, [and their vote] means that you have fallen short of their expectations,” he said.

Alan added that as long as the elections were fair, honest and there were “no guns, goons and gold involved,” then it’s better to “let the people decide.”

At the same time, he refused to let their victory be marred by a pending disqualification petition filed against his wife in the Commission on Elections.

Petitioner Leonides Buac earlier questioned the legality of the couple’s declaration of different addresses in their certificates of candidacy to allow them to run in separate districts.

But the Comelec ruled in favor of Allan, saying that candidates could maintain several places of residence without losing their domicile in the process.

Allan described the petition as a mere smear job from their rivals who wanted to see them defeated.

“They only magnified that issue because they wanted to see us out,” Alan said. “Now that Taguigeños have spoken, we have to respect their choice.”