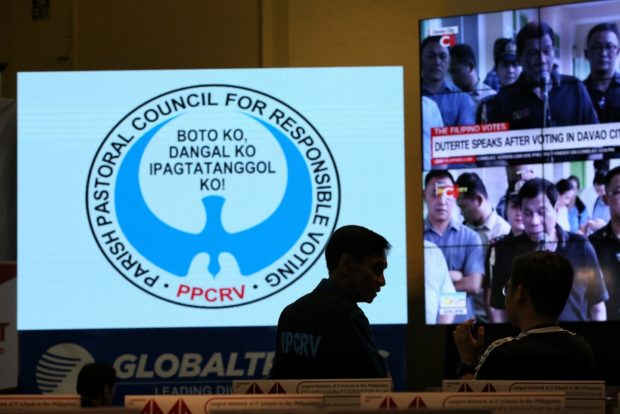 MANILA, Philippines — Numbers from the Parish Pastoral Council for Responsible Voting (PPCRV) on the partial and unofficial tallies for the 2019 midterm elections dropped after the 6 a.m. update, causing some concern among observers.

Based on results from the PPCRV’s transparency server, which is tied to the INQUIRER.net homepage, the voter turnout dropped from 70 percent at 5:48 a.m. to 38 percent by 6:21 a.m on Tuesday.

For instance, the vote count for senatorial race front-runner Senator Cynthia Villar went down from 24,139,134 to 12,774,125.  The same was observed in tallies for other candidates and the party-list race.

PPCRV Spokesperson Agnes Gervacio told reporters at its command central at the Pope Pius XII Catholic Center that they had received reports from media partners about the glitch.

Media sites hooked up to the transparency server had the same issue.

“We have been receiving feedback from the media that the numbers have been changing and going down, as of now we’re waiting for clarification,” Gervacio said.

As of posting, PPCRV was still awaiting an explanation from the Commission on Elections (Comelec) about the glitch.

“We’re seeking clarification and we’re checking out data, whatever is available out there.  We’re as anxious to receive the news as you guys are,” she said.

She clarified that PPCRV was only relying on information Comelec provided them, as its citizen’s arm.

“At the end of the day, we know that these are the transparency servers that we are waiting for, and Comelec are the ones who are sending us these numbers,” she explained.

This is not the first time that the transparency servers encountered problems.  After an initial report on Monday evening, the transmission was delayed for eight hours until 2:00 a.m. on Tuesday.

Comelec, however, has clarified that the transmittal of votes by the vote counting machines were not affected. (Editor: Cenon B. Bibe Jr.)