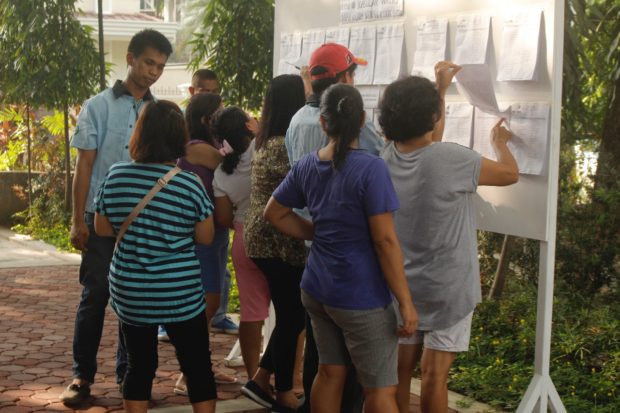 Residents of Valle Verde 5 look for their names at the list of registered voters in Pasig City. Photo by Gabriel Pabico Lalu/ INQUIRER.net

MANILA, Philippines — Only a few individuals have cast their votes two hours after polling precincts in Pasig City opened.

Meanwhile, precincts inside the Valle Verde Country Club villages are seeing low turnouts as of now, primarily because of occasional rain showers.

WATCH: People inside Valle Verde 5 village in Pasig City have started casting their votes as of 7:30 a.m. Pasig mayoralty candidate and Councilor Vico Sotto is expected to vote here in this precinct. @inquirerdotnet pic.twitter.com/DkMB2Piss7

Incumbent Pasig Mayor Robert “Bobby” Eusebio will vote inside the Rosario Elementary School while his opponent Councilor Vico Sotto will make his choices at the Valle Verde 5.