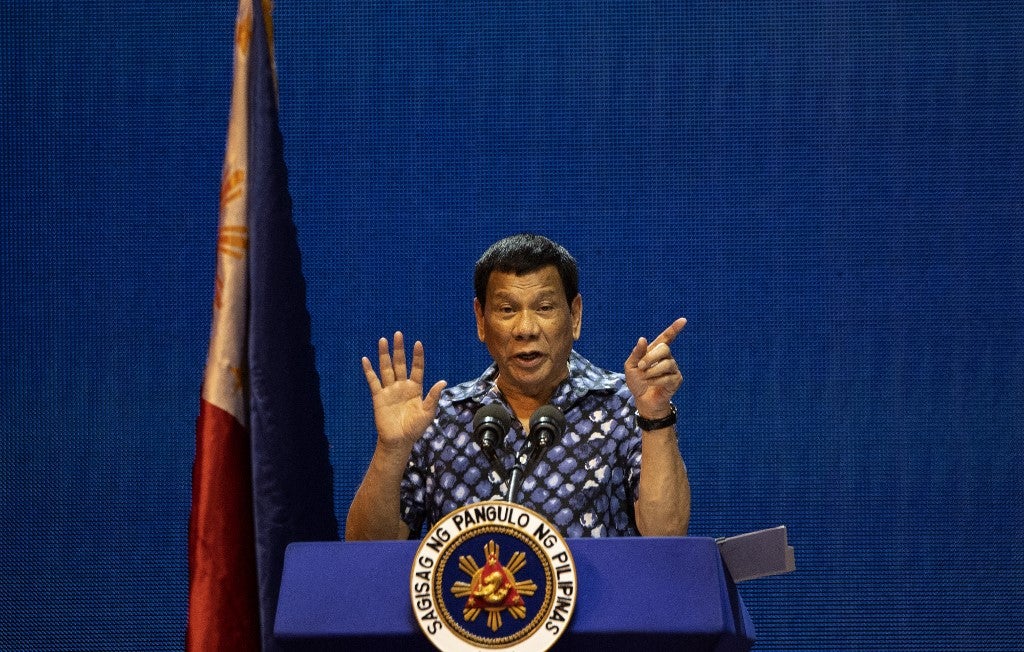 Philippine President Rodrigo Duterte gestures during the Partido Demokratiko Pilipino-LakasBayan (PDP-LABAN) meeting in Manila on May 11, 2019 ahead of the mid-term elections on May 13. (Photo by Noel CELIS / AFP)

MANILA, Philippines–Filipinos vote Monday in midterm polls that are expected to strengthen President Rodrigo Duterte’s grip on power, opening the way for him to deliver on pledges to restore the death penalty and rewrite the constitution.

Duterte has found international infamy for his foul-mouthed tirades, but remains hugely popular among Filipinos fed up with the country’s dysfunction and elite politicians.

He wants to bring back capital punishment for drug-related crimes as part of a deadly crackdown on narcotics in which thousands of suspects and drug dependents have already been killed.

His tough-on-crime platform — which also includes lowering the age of criminal responsibility from 15 to 12 — was key to his landslide election victory in 2016.

More than 18,000 posts are at stake when polls open for the more than 61 million registered voters at 6:00 am (2200 GMT Sunday), including half of the seats in the upper house Senate.

But for Duterte the key is wresting control of an independent-minded Senate while keeping the House of Representatives in the hands of his allies.

Historically, the nation’s 24 senators — who serve six-year terms — have had a reputation for being more independent-minded than the lower house.

Winning a Senate majority, something which independent national surveys indicate is well within reach, would give him legislative backing for his anti-crime proposals and his plan to rewrite the constitution.

The opposition warns that could lead to the single-term limit for the presidency being lifted, allowing him to seek re-election despite his repeated statements that he would stand down at the end of his mandate.

It would also allow him to expand his contentious anti-drug crackdown by bringing back the death penalty, a pledge which the UN Human Rights Council said gave it “deep alarm”.

The Philippines outlawed capital punishment in 1987, reinstated it six years later and then abolished again in 2006.

The 73-year-old hit the campaign trail to get his supporters in the Senate, giving two-hour speeches at late-night rallies and routinely insulting their opponents — calling one a “faggot” and accusing another of lawyering for communist guerrillas.

The results for municipal and city mayors and councils are expected within hours after the polls close at 6:00 pm Monday, with winners for the Senate and congressional seats scheduled to be declared from Friday.

Even if the presidential term limit is not lifted, the Duterte family looks well-placed to continue after him.

The president’s daughter Sara — tipped by many as the president’s potential successor in the 2022 presidential vote — is running to keep her post as mayor in its southern bailiwick of Davao city.

Her younger brother Sebastian is seeking, unopposed, the city’s vice-mayoral seat, while the eldest presidential son Paolo is standing for a seat in the House of Representatives.

Electoral contests in the Philippines have always been bloody, with dozens, including candidates and their supporters, getting killed in the fierce competition for posts that are a source of wealth in a nation with deep poverty.

Police are on full alert to safeguard Monday’s balloting as the bloody trend continued this year, with 14 dead and 14 wounded in “election-related violent incidents” since January, according to a grim official count.