MANILA, Philippines  — Philippine President Rodrigo Duterte’s name is not on the ballot but Monday’s midterm elections are seen as a crucial referendum on his rise to power with a brutal crackdown on illegal drugs, unorthodox style and contentious embrace of China.

Nearly 62 million Filipinos have registered to choose among 43,500 candidates vying for about 18,000 congressional and local posts in one of Asia’s most rambunctious democracies.

The most crucial race is for 12 seats in the 24-member Senate, which Duterte wants to fill with allies to bolster his legislative agenda. That includes the return of the death penalty, lowering the age for criminal liability of child offenders and revising the country’s 1987 constitution primarily to allow a shift to a federal form of government, a proposal some critics fear may be a cover to remove term limits.

Opposition aspirants consider the Senate the last bastion of checks and balances given the solid dominance of Duterte’s loyalists in the lower House of Representatives. Last year, opposition senators moved to block proposed bills they feared would undermine civil liberties.

Duterte’s politics and key programs, including his drive against illegal drugs that has left more than 5,200 mostly urban poor suspects dead, have been scrutinized on the campaign trail and defended by close allies running for the Senate, led by his former national police chief Roland dela Rosa, who first enforced the crackdown when the president took office in mid-2016. 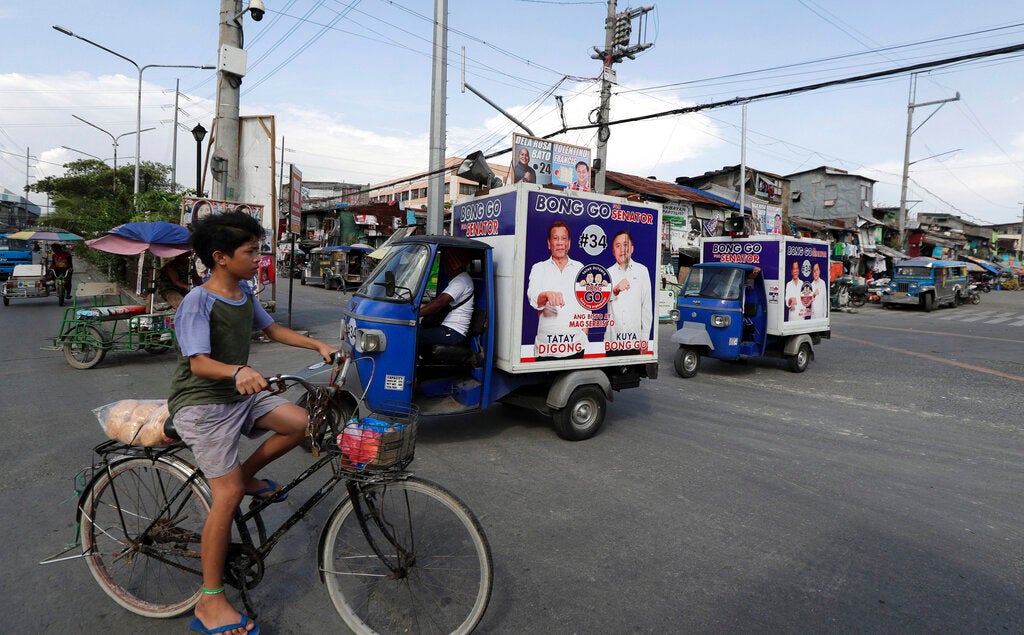 In this Thursday, May 9, 2019 photo, pedicabs with election posters go around Manila’s slum district of Tondo, Philippines. Philippine President Rodrigo Duterte’s name is not on the ballot but Monday’s mid-term elections are seen as a referendum on his phenomenal rise to power, marked by his gory anti-drug crackdown and his embrace of China. (AP Photo/Aaron Favila)

Aside from the drug killings, Duterte’s gutter language and what nationalists say is a policy of appeasement toward China that may undermine Philippine territorial claims in the South China Sea, have also been hounded by protests and criticism.

“This is very much a referendum on his three years of very disruptive yet very popular presidency,” Manila-based analyst Richard Heydarian said. “Are we going to affirm or are we going to reject the 2016 elections? Was that an aberration and historical accident that we have to fix, or is this actually the beginning of the kind of new era or new normal?”

A May 3-6 survey by independent pollster Pulse Asia showed 11 of Duterte-backed senatorial candidates and four other aspirants in the winning circle, including only one from the opposition. The survey of 1,800 respondents had a margin of error of plus or minus 2.3 percentage points.

While the election survey strongly indicated a favorable outcome for Duterte, there was a probability that the result could still change given the considerable number of undecided voters and narrow leads of some candidates.

Divided, cash-strapped and without a unified leader, opposition aspirants are fighting an uphill battle to capture the few number of Senate seats they need to stymie any hostile legislation. Many Filipinos seem more open to authoritarianism due to past failures of liberal leaders, Heydarian said. Such a mindset has helped the family of former dictator Ferdinand Marcos to make a political comeback. 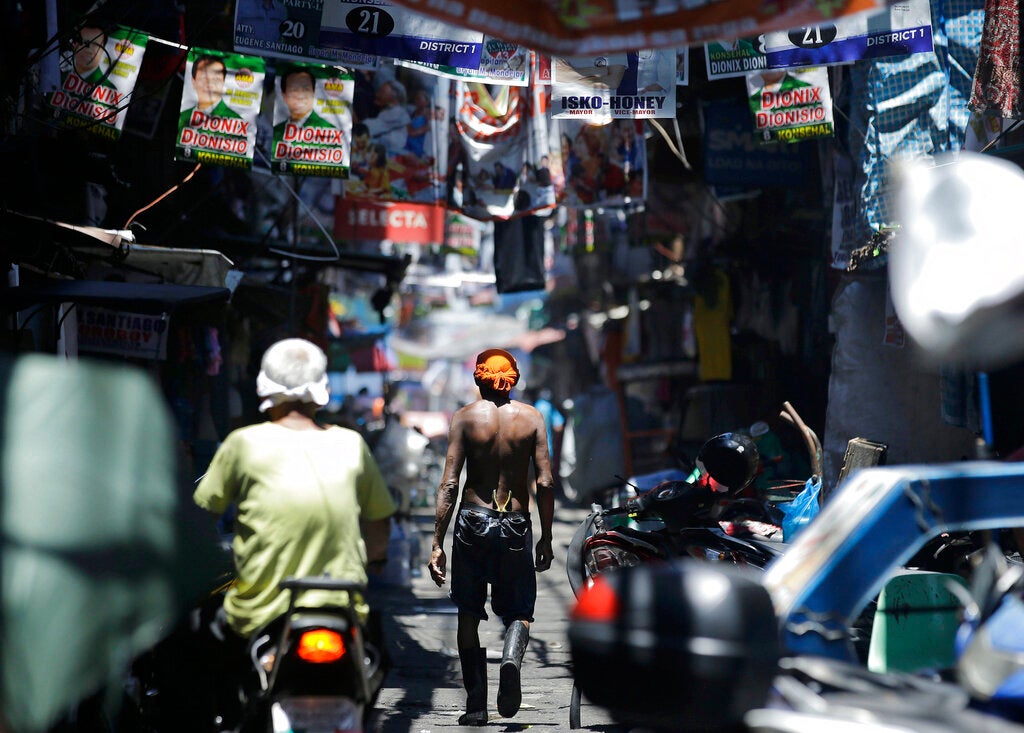 In this Thursday, May 9, 2019, photo, a man walks past election banners in the slum district of Tondo, Manila, Philippines. Philippine President Rodrigo Duterte’s name is not on the ballot but Monday’s mid-term elections are seen as a referendum on his phenomenal rise to power, marked by his gory anti-drug crackdown and his embrace of China. (AP Photo/Aaron Favila)

Among many dirt-poor Filipinos, however, the concern is day-to-day survival.

“Martial law is scary but we’re more afraid of dying in hunger,” Arturo Veles, a jobless father of six, told The Associated Press.

Wiping away tears, Veles spoke outside his family’s shanty in the humid squalor atop Smokey Mountain, a long-closed dumpsite in Manila’s Tondo slum that remains a symbol of the country’s appalling poverty. His asthma-stricken wife, Agnes, said that not one congressional candidate had treaded the fly-strewn and trash-littered path to their cluster of crumbling huts, probably because of the smell and filth.

Arturo Veles said the poor always suffer the most, indicating he and his wife would not vote for administration candidates. “They only see the poor, those using and selling drugs. That’s the only thing they see, not the depth of our poverty.”

Village guard Jose Mondejar, who lives in a Tondo community heavily festooned with elections streamers and posters, said Duterte’s anti-crime campaign has reduced daytime robberies by drug addicts of passing cargo trucks by about 70 percent in his neighborhood.

“Criminals once even opened fire on our village hall because we were cracking down on them,” he said. “Now you can walk around here without being pestered. Duterte’s campaign has worked.”

Duterte to public: Avoid people who are attention seekers like Trillanes