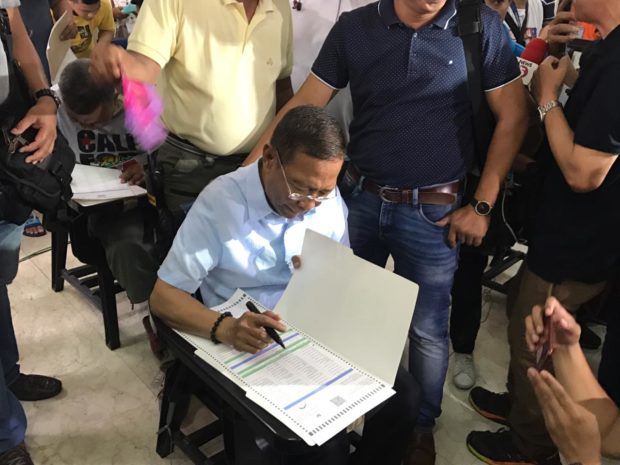 Binay left his home at 6:23 a.m. to attend a mass at the St. Alphonsus Mary de Ligouri in Magallanes.

Dressed in blue polo and black jeans, Binay, who is running as a representative of the first district of Makati arrived at his polling precinct at 7:31 a.m.

READ: Jejomar Binay to run for Congress in 2019

As of posting time, the vote counting machine is not reading Binay’s ballot.

The 76-year old Binay, whose house was just a few steps away from the school, arrived alone, contrary to the 2016 national elections when he was joined by his son, Makati mayoral candidate Jejomar Erwin “Junjun” Binay Jr.

Junjun is running against his sister, incumbent Makati Mayor Abby Binay, who is supported by their father.

Binay served as Makati mayor for two decades until he became vice president in 2010.

READ: A tale of 2 siblings: Binay vs Binay

The older Binay cast his vote in clustered precinct 189.

Binay, who is seeking to return to politics after losing in the 2016 presidential elections, is running against Liberal Party candidate Kid Peña, and independent candidates John Mesina and Ferdinand Sevilla.