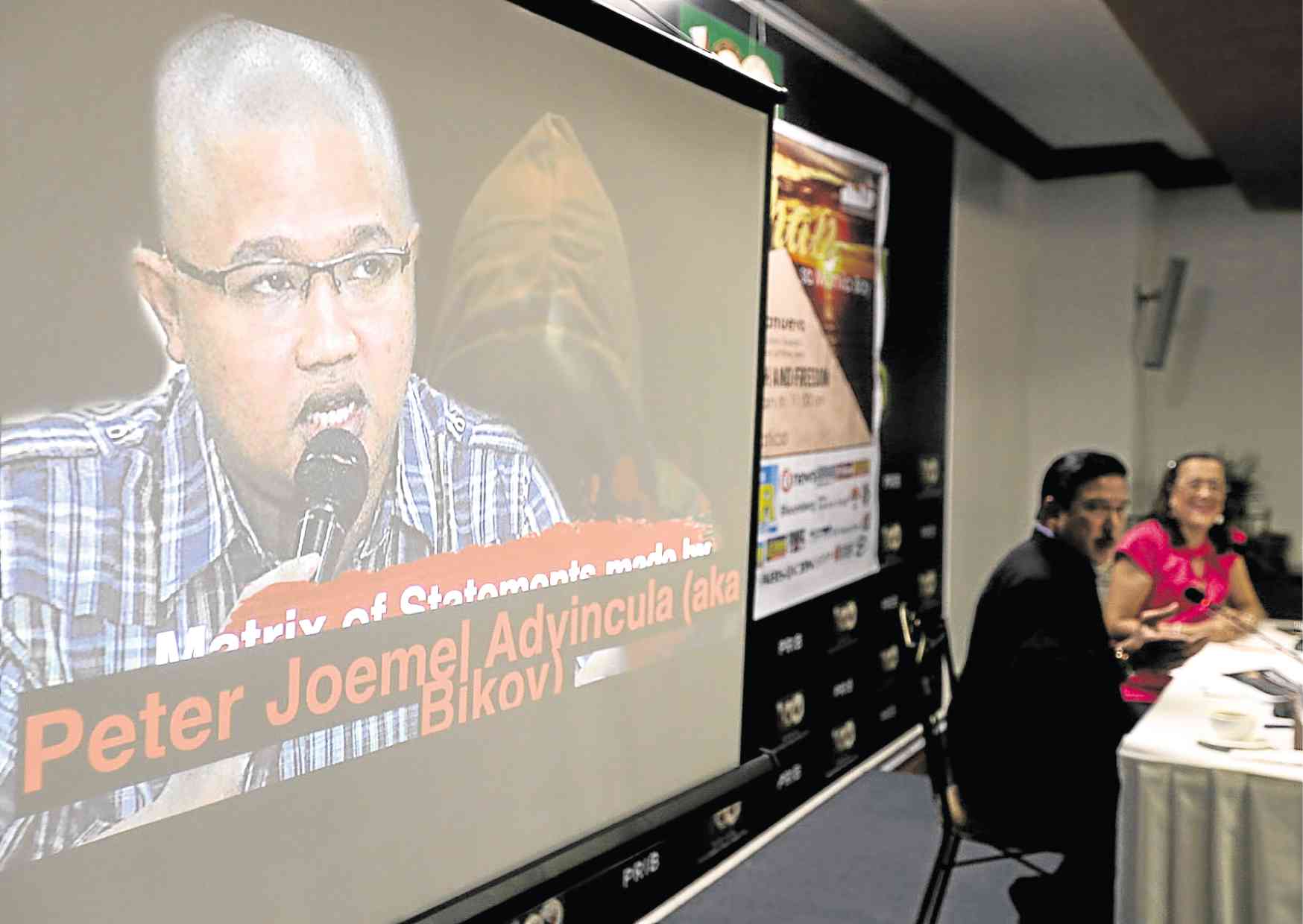 NO CREDIBILITY Senate President Vicente Sotto III tells a news forum on Wednesday about Peter Joemel Advincula’s attempt in 2016 to sell to his office information on the alleged links of then President Benigno Aquino III and some members of his Cabinet to the narcotics trade. Advincula is doing “the same thing” now, Sotto says, and it may have “something to do with the 2019 elections.” —RICHARD A. REYES

MANILA, Philippines — Peter Joemel Advincula is not getting free legal assistance and he will not be heard in the Senate.

Advincula, who claimed he was “Bikoy,” the hooded man in the series of videos that linked members of President Rodrigo  Duterte’s family to the narcotics trade, was refused assistance by the Integrated Bar of the Philippines (IBP) on Wednesday because the group did not want to be involved in partisan politics.

“In pursuit of its mandate to provide access to justice to the poor and marginalized, the IBP cannot be seen to be siding with or going against any candidate or political party,” IBP national president Abdiel Fajardo said in a statement.

Fajardo said the IBP would not make public the documents Advincula submitted on Monday, when he, accompanied by nuns, turned up at the group’s national office in Pasig City and spoke to reporters.

Advincula claimed that he was Bikoy and said he wanted to file charges against the people he alleged in the videos to be linked to the illegal drug trade, including President Duterte’s son Paolo, son-in-law Manases Carpio and former special aide Christopher “Bong” Go.

He said he was ready to face a Senate investigation to prove his allegations.

Advincula almost got that, with Sen. Panfilo Lacson announcing on Tuesday that his committee on public order and dangerous drugs had invited him through the IBP to appear at a hearing on Friday.

Lacson said Advincula should submit a sworn statement and evidence to support his allegations. But on Wednesday, Lacson said he had called off the hearing and recalled the invitation to Advincula.

“Enough of this nonsense,” Lacson tweeted. “The problem with asking (Advincula) who are the people behind him is if we will believe him.”

Earlier on Wednesday, Senate President Vicente Sotto III told a news forum that Advincula was the same man who came to his office in 2016 and tried to “sell” similar accusations against then President Benigno Aquino III and some members of his Cabinet.

Sotto said Advincula handed to him a sworn statement and a list of bank accounts in which hundreds of millions of pesos and Chinese yuan in protection money were deposited for senior Aquino administration officials.

Sotto said Advincula claimed to have seen Aquino receive two cash-filled envelopes from businessman Zaldy Co, whom he identified as the leader of the “Quadrangle” drug syndicate, during their meeting in the basement of Misibis Bay Resort in Albay province sometime in April 2011.

“It’s the same script [but with a] different [cast]. As the Americans say: same dog, different collar,” he added.

“It’s not that I’m taking up the cudgels for anyone. I’m just stating the facts. I’m saying that in 2016, he did the same thing. I can only surmise that perhaps it has something to do with the 2019 elections,” Sotto said.

The Senate President said Advincula first contacted his office in December 2016 through a journalist, whom he did not identify, offering information against Aquino and the then President’s associates.

He said he sent a member of his staff, Hutch Altavas, to see Advincula at New Bilibid Prison in Muntinlupa City, where Advincula was being held after his conviction for fraud.

Showing a copy of the visitor’s pass issued to Altavas at Bilibid, Sotto said Altavas visited Advincula at the prison’s medium security compound on Dec. 2, 2016.

He said Advincula and Altavas exchanged text messages for two weeks about the information against Aquino and his aides and supposed documentary evidence.

Moments after Advincula appeared at the IBP national office on Monday, Sotto said Altavas called him up to say Advincula was the same man who sought help from them in 2016.

Altavas told reporters that he initially thought Advincula’s story was credible, as Advincula had documents to support his allegations.

But he said he started to doubt Advincula’s credibility when he refused to share the information with Lacson.

Asked if Advincula had asked for something in exchange for the information and evidence against Aquino, Altavas said Advincula told him he wanted to be released from prison.

“He also asked for security for his family and some monetary consideration. But he did not mention the amount,” Altavas said.

“When he told us that the money (for Aquino) was being transported from Clark airport (in Pampanga province) to China aboard a helicopter, that made us doubt him even more,” he said.

Sotto said his office verified with HSBC branches in Makati City and Hong Kong the bank account numbers on Advincula’s list and was told that the data were spurious.

The Philippine National Police has learned that Advincula is known to be a seller of information to law enforcement agencies.

“There’s one here who gave money to him as part of intelligence [gathering],” Police General Oscar Albayalde, the PNP chief, told reporters on Wednesday.

“[The information] from him had printouts [detailing] then the same things he’s releasing now,” Albayalde said.

“It’s not just one agency. I can’t say which [law enforcement] agencies, but he was able to fool them. He even knows our senior officers here who [are waging] an intensified campaign against illegal drugs,” he said.

Albayalde said Advincula would ask for P50,000 to P70,000 in exchange for information.

“Several times he got a large amount, and it turned out everything he said was false,” Albayalde said.

The PNP chief said Advincula also had been making claims that investigators found to be false.

Among these, he said, was Advincula’s reference to Masibis Bay Resort as a drug laboratory and safe haven for the Quadrangle group of drug traffickers and their associates, including local politicians and businessmen.

“When we verified this supposed laboratory, it turned out it was a [legitimate] resort,” Albayalde said.

He said investigators also found nothing to support Advincula’s claim of a “Davao Group” that included Paolo Duterte, Carpio and Go.

“Even the Quadrangle group that he claims, it’s nonexistent,” Albayalde said. —WITH REPORTS FROM DONA Z. PAZZIBUGAN AND JAYMEE T. GAMIL