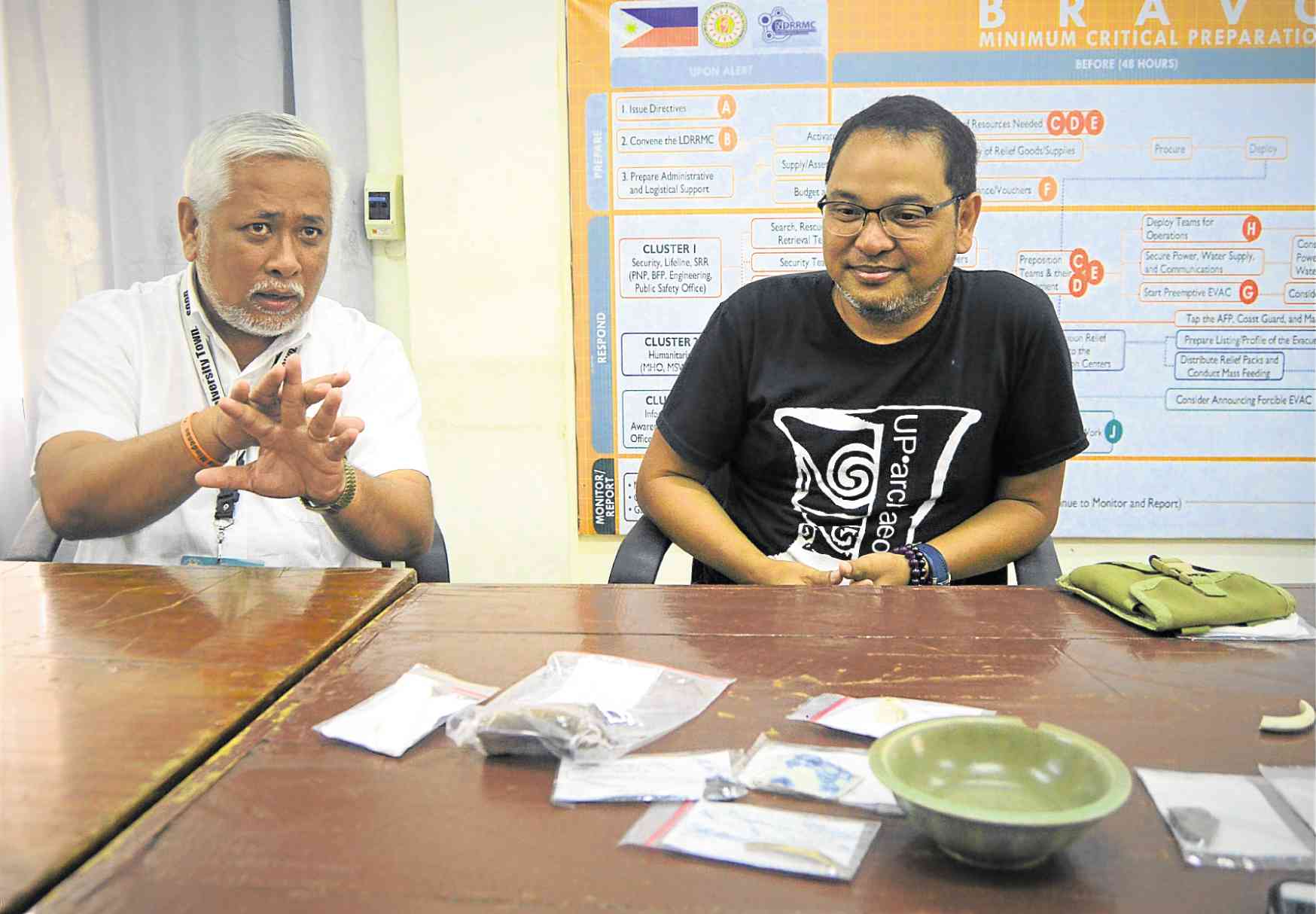 PRECIOUS PICKS Mayor Alvin Labis (left) of Alubijid, Misamis Oriental province, and Leee Anthony Neri of the Archeological Studies Program at the University of the Philippines Diliman present artifacts excavated from a mound dating from the Neolithic Period and ceramics from the Ming dynasty. —JIGGER J. JERUSALEM

CAGAYAN DE ORO CITY, MISAMIS ORIENTAL, Philippines — Archeologists have found tools made of obsidian (volcanic glass) and chert (fine-grained sedimentary rock) dating back to the Neolithic Period some 5,000 years ago in a coastal area in what is now Misamis Oriental province.

The Neolithic Period refers to the last stage of the Stone Age which saw the spread of agriculture, the use of polished stone tools and the rise of megalithic structures.

A team from the Archeological Studies Program at the University of the Philippines Diliman also found earthenware shards with intricate designs associated with the Sa-Huynh-Kalanay pottery from Vietnam, and ceramics associated with Yuan, Ming and Qing dynasties.

The artifacts were unearthed in the town of Alubijid during an excavation from April 22 to May 7 by the team led by Leee Anthony Neri.

Neri said the early inhabitants of Alubijid had dynamic interactions with neighbors from other lands now known as Southeast Asia based on the objects found at the excavation site on Ilihan Hill, a mound of limestone overlooking the town’s shoreline in Barangay Poblacion.

A usable bowl and other prehistoric items from Ilihan pointed to people who had been living there for millenniums and exchanging goods with travelers from distant shores, according to Neri.

He said the chips from crude tools made of obsidian and chert could be traced to the Neolithic Period, around 3,000 BC, while the tradeware ceramics from China were from the late Ming dynasty circa 15th century, he said.

The objects from separate ages were buried and forgotten, but because the site is located on top of a limestone, the sediment was not thick and made it easier for archeologists to find the artifacts, Neri said.

“The only problem is that the site has been continuously plowed. This destroyed the artifacts, especially pottery,” he added.

The UP archeological team also dug up what they ascertained to be a part of a church. Neri said the hill could be the site of the first religious structure in Alubijid that the Recollect priests built in 1865.

The second and the most recent church in the town was built by the Jesuits in 1890.

Neri said the team also found a “horno” (kiln) used in making bricks for the construction of the church. It is the only Spanish-era kiln in this part of Northern Mindanao that has survived the ravages of time, he said.

The recent discovery proves that Alubijid has been occupied by settlers as early as 3,000 BC up to the coming of the Spaniards, according to Neri.

He said the government must intervene to protect the excavation areas and other potential digging sites.

Ilihan Hill has become privately owned land. Once a corn field, the area is no longer farmed and is now occupied by a number of houses and a cell site for a telecommunication company.

Neri first visited the town in 2014 to conduct a study on the Spanish-era kiln and became curious on possible finds on Ilihan Hill after he was told that it was the town’s first settlement.

He was invited by local leaders led by Mayor Alvin Labis to return to the place. The UP Archeological Studies Program defrayed the cost of excavation and the municipal government hosted the team’s stay.

Labis said the municipal government might ask the landowner to donate or sell the area to the government.

“We hope the site will not be disturbed. We fear that after the archeological team has left, gold hunters will dig there, resulting in reckless excavation of the area and destroying the remaining artifacts,” the mayor said.

Historical accounts about Alubijid revealed that Ilihan Hill was an ideal settlement for early inhabitants. From its summit, one can see the Macajalar Bay and even the seas beyond the Sulawan Point in Misamis Oriental, which allowed settlers to see incoming trade vessels or those of marauders.

Vice Mayor Emmanuel Jamis said the municipal council must pass an ordinance to preserve the site.