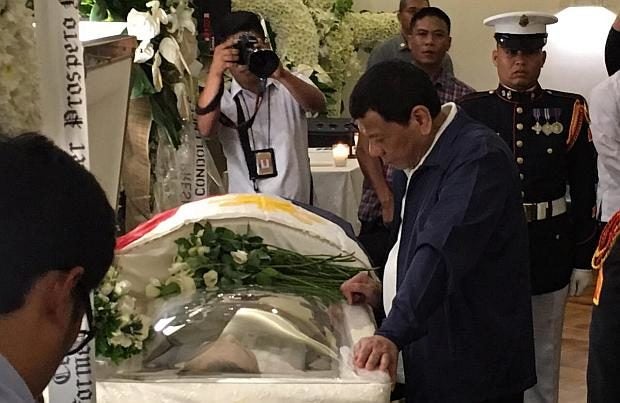 President Rodrigo Duterte visits the wake of former House Speaker Prospero Nograles at the Heritage Park in Taguig City on May 5, 2019.  (PHOTO  from Office of the Cabinet Secretary)

The viewing will be until Saturday, May 11, or a day before his burial on May 12, which is the eve of the midterm elections.

Nograles’ remains was given special honors at the headquarters of the Eastern Mindanao Command (Eastmincom) after it arrived aboard a C-130 plane at 6 p.m. Tuesday. It was then brought to the funeral home for a private viewing exclusive to family and friends.

His son, Rep. Karlo Nograles, thanked all supporters of his father for their thoughts and prayers.

Nograles’ supporters include former Barangay Captain Conrado Bonsubre of 34-D and Barangay 8-A Councilor Gemma Ecoy, who both remember Nograles for the free medical aid, medicines, and scholarship he used to give to people in their barangays.

Nograles served as president of the Integrated Bar of the Philippines (IBP) Davao Chapter before he was elected congressman in 1987 after winning a political protest against former Rep. Jesus Dureza.

In 1992, he ran for Congress in Davao City’s first district but lost to former Davao city mayor and now President Duterte.

Nograles ran for Congress in the succeeding elections and won. He served as House Speaker from 2008 to 2010 during the time of President Gloria Macapagal-Arroyo, now Pampanga’s 2nd district representative. /ee