MANILA, Philippines — House members and employees honored former Speaker Prospero Nograles, the first Mindanaoan Speaker of the chamber in a hundred years, as he returned to his “second home” on Tuesday. 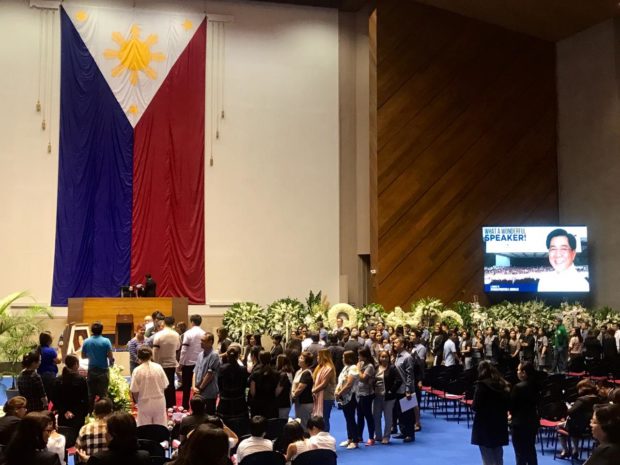 Retired Secretary-General Atty. Marilyn Yap recounted the reforms and legacies of Nograles as House Speaker from 2008 to 2010, such as establishing a continuing education program for secretariat personnel.

“He lived a full life in the service of our God, our country and our people,” Yap said during the necrological service at the House plenary hall, thanking Nograles for making her the first woman secretary general of the lower House.

It was under Nograles, stewardship that the House underwent its first comprehensive rehabilitation and upgrading, according to Yap. Nograles also initiated reforms to “improve institutional legislative performance” such as clearing legislative agenda per session, monitoring the status of bills, and tracking attendance and performance of congressmen, she added.

Former lawmaker and Foreign Affairs Sec. Alan Peter Cayetano, meanwhile, said Nograles’ speakership was “most productive” because of the “relationships he forged in this hall.” Cayetano described him as “the boy next door” Speaker, who was “always up” and would never let others feel down.

Cayetano said he also admired Nograles’ legacy of being a “reformist.”

“Si Speaker Nogie came in during very controversial times but hindi nawala sa kanya ‘yung pagiging reformist. If you look whether on his reforms sa committee system, ‘yung physical na pag-aayos ng Congress, giving emphasis to Mindanao, these are part of his legacy eh,” he added in an interview.

Speaker Gloria Macapagal-Arroyo also recounted how Nograles was always fond of singing the song “What a Wonderful World.”

“Yes, Boy, what a wonderful world you helped create with your friendship, with your work…” Arroyo said.

As Nograles came back to his “second home,” his son Rep. Jericho thanked his father for “cleaning” the House and ridding it of ghost employees, among others, when he was elected the House Speaker in 2008.

A 1972 bar topnotcher and a 1985 TOYM Awardee for Law and Human Rights, Nograles became Speaker of the House on Feb. 5, 2008, 14th Congress, during the time of former President Gloria Macapagal-Arroyo. He was the chamber’s Majority Leader during the 13th Congress. The Ateneo Law graduate served as a congressman for 15 years.

Although Nograles’ wife and Duterte are cousins, the two families had opposed each other in the mayoralty and congressional race in Davao since 1992. In the latter part of 2015, the Nograles family decided to set aside their political rivalry with the Dutertes and supported then-Mayor Duterte’s bid for the presidency.

Sec. Karlo earlier said his father’s remains will be flown to Davao later as the former Speaker would also be laid to rest there on Sunday.  /jpv