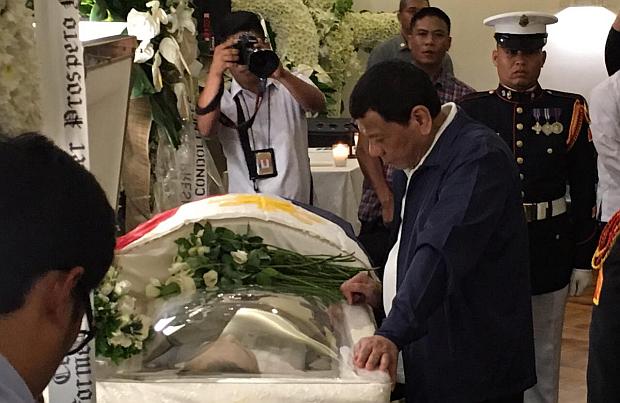 President Rodrigo Duterte visits the wake of former House Speaker Prospero Nograles at the Heritage Park in Taguig City on Sunday night, May 5, 2019. Nograles died on Saturday, May 4, due to respiratory failure. (Photo from Office of the Cabinet Secretary)

Nograles served as House Speaker from 2008 to 2010 during the term of then President Gloria Macapagal- Arroyo.

Duterte and Nograles were once political rivals that lasted for almost two decades.

Nograles ran against Duterte as Davao City mayor in 1992 but lost.

He again ran fo Davao City mayor in 2010 but lost to presidential daughter and Sara Duterte-Carpio.

During the 2016 elections, Nograles and his family supported Duterte’s presidential bid, ending the political rivalry between the two clans.

In his statement on Sunday, Duterte condoled with the family of Nograles as he remembered the legacy of the late lawmaker.

“His legacy as a leader who used his voice to speak on behalf of the Filipino people will continue to inspire other politicians and leaders who are committed to serving their countrymen,” he said.

“May he find eternal peace and repose in the arms of our loving Father in heaven. It is also my prayer that the Lord Almighty ease your pain and that you will find solace and strength during this difficult time,” he added.