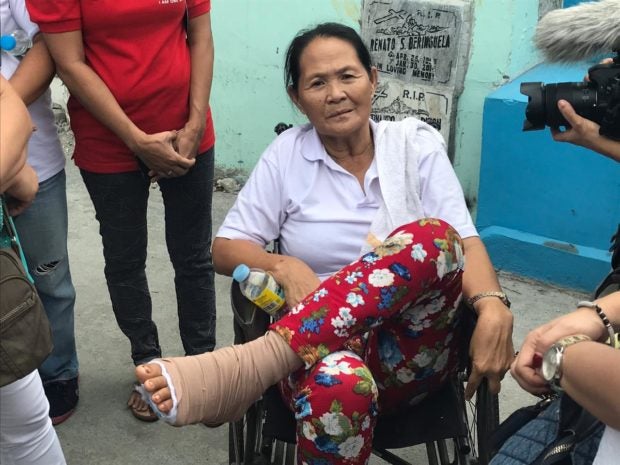 Elsa Montañez speaks to the media about her grandson at the Tala Cemetery on May 8,2019. PHOTO by Consuelo Marquez/INQUIRER.net

MANILA, Philippines — Days before the celebration of Mother’s Day, the grandmother and mother of the six-year-old boy hit by a stray bullet in a Caloocan shootout were grieving over his death.

The grandmother, sixty-five-year-old Elsa Montañez, said she needs distractions to distance herself from the sadness she felt after her grandson’s death.

“Kaya kailangan namin yung laging may kausap laging may kwentuhan para hindi namin masyado iniisip yung nangyari (We always need to talk to someone, so we don’t always think about what happened),” she added.

Gian’s mother, Jessa Habal, has not accepted her son’s death yet as she said Gian brought happiness to their home.

“Ang hirap. Hindi ko siya makakasama. Siya kasi nagbibigay ng saya dito sa bahay (It’s difficult to come to terms with the loss and to even think that he is no longer with us. She gives us happiness),” Jessa, whose face looked tired due to sleepless nights, told INQUIRER.net in an ambush interview. 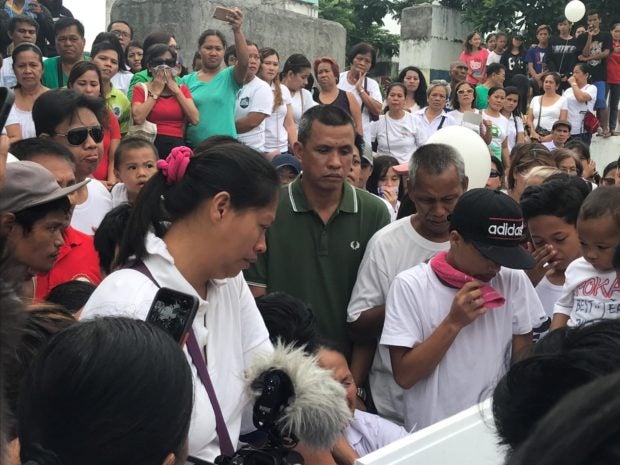 Gian Habal’s mother Jessa (left) n tears beside her son’s casket at the Tala Cemetery on May 08, 2019. PHOTO by Consuelo Marquez/INQUIRER.net

Montañez said will miss Gian’s kindness, noting that she did not have any problems with her grandson.

(When I wake up in the morning, he’s beside me. And when I call him to say I have an errand for him, he always answers: ‘What is it, mi?’)

On April 28, Gian was playing outside their house when a bullet hit him in the forehead during a chase between Police Cpl. Rocky delos Reyes and a drug suspect.

Gian was rushed to the Caloocan City North Medical Center but was pronounced dead by his attending physician.

Despite the tragedy, the family is thankful for the public’s support and believes that  justice was “somehow” served because murder raps have been filed against Delos Reyes.

Delos Reyes, who was assigned to the Caloocan Central Police Station’s Administration Holding Unit, surrendered to authorities after the incident.

Murder charges have been filed against the police officer at the Caloocan City Prosecutor’s Office.

Montañez, who was still on a wheelchair and with the left foot in a bandage during the funeral, recounted her encounter with Delos Reyes.

(When I was holding him by the collar, she shot me and ran. I saw kind of police officer that he is. I didn’t witness how Gian was killed, but he was there.)

Montañez was wounded after Delos Reyes shot her foot when she tried to stop him from escaping the crime scene.

Asked for a message for the law enforcer, Gian’s grandmother got angry as she was reminded of Delos Reyes’ crime.

“Ano na dapat imensahe ko sa hayop na yun kung ihaharap niya sa akin iyon, mata lang niya ang walang latay sa ginawa niya (What can I say to that man? If you bring him to me now, he would be in bad shape),” she said. /ee 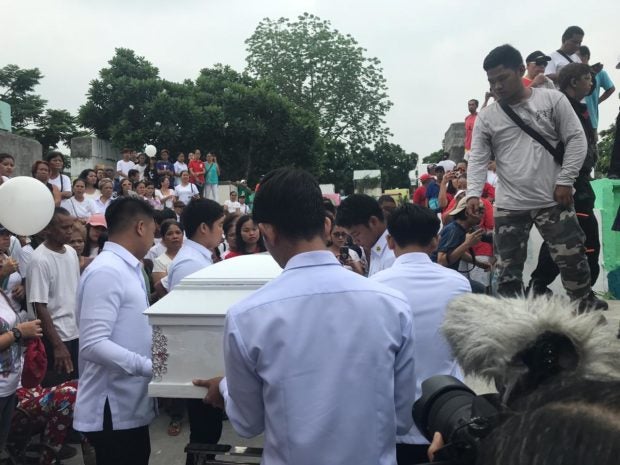 Stray bullet victim Gian Habal was laid to rest at the Tala Cemetery on May 08, 2019. PHOTO by Consuelo Marquez/INQUIRER.net

Read Next
Woman breaks door of cafe for not having donuts, gets arrested
EDITORS' PICK
Water remains our saving grace right now
For nation’s birthday, Trump slams the enemies within
Military on heightened alert in Maguindanao after BIFF attacks
Give anti-terror law a chance, ditch misinformation – Defense Sec. Lorenzana
EuroMillions Superdraw: A lottery draw unlike any other is coming to the Philippines
Smart releases Hyun Bin’s second TVC
MOST READ
NAIA Terminal 3 to open for international flights starting July 8
Hyun Bin: ‘I will meet with my Filipino fans first’
BI officers sacked for ‘fictitiously’ encoding Wirecard COO’s entry to PH
Anti-Terrorism Council’s first move: Make a list
Don't miss out on the latest news and information.