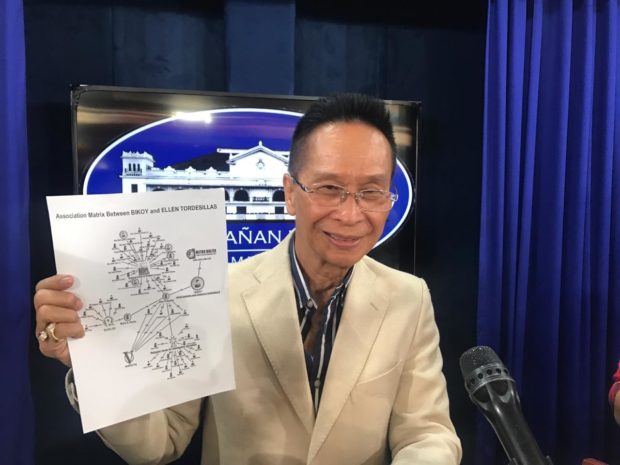 Human rights lawyer and Otso Diretso contender Chel Diokno schooled Panelo that public officials like him “must have a high standard for truth.”

Diokno stressed that any accusation made — in or out of court —  should be backed up by evidence and not on “blind and absolute belief in one’s leader.”

“So whether the matrix came from the President or an unknown number, Mr. Panelo owes it it to the Filipino people to verify information before he broadcasts it to the public. Hearsay, gossip, and blind belief have no place in Malacañang,” he told INQUIRER.net.

Makabayan senatorial candidate Neri Colmenares, meanwhile, warned that the “completely irresponsible, unacceptable and dangerous” allegations of an ouster plot against the Chief Executive could endanger the lives of lawyers and journalists.

“Like the fake matrix, Duterte’s fantastic allegations about his critics being destabilizers, coup plotters and communists should be ignored and simply dismissed as the rantings of a lunatic,” Colmenares added.

Duterte, Panelo mandated to be honest

For her part, Otso Diretso candidate Samira Gutoc nixed Panelo’s claim that the President is a “very honest man.”

But Gutoc noted that Duterte’s past statements, often interpreted by Panelo as jokes, prove otherwise.

The civic leader from Marawi City, nonetheless said, Duterte, Panelo and any other public official are “obliged and mandated to be honest.”

“His accusations should be verified lest he wants to be seen as politicking and peddling fake news,” she added.

A major broadsheet earlier published a diagram, titled “Association Matrix Between Bikoy and Ellen Tordesillas.” The so-called matrix showed the alleged links among a certain “Bikoy,” news site Rappler, nonprofit media outfit Vera Files, the Philippine Center for Investigative Journalism, and the National Union of Peoples’ Lawyers (NUPL), and other journalists and lawyers who are allegedly behind an attempt to unseat Duterte.

The accused personalities and organizations have denied the claim, with NUPL calling it “putrid garbage” and “not worth the paper it is written on.”

Armed Forces of the Philippines public affairs chief Col. Noel Detoyato, meanwhile, said they have not monitored any specific threat to oust the Chief Executive.