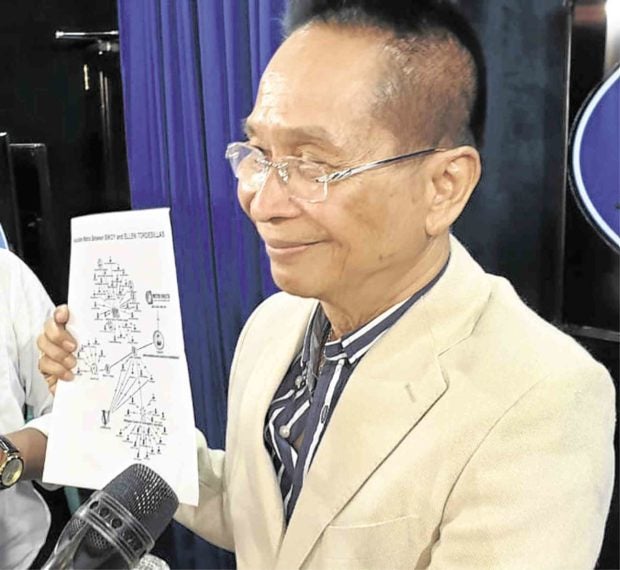 CONNECTIONS Presidential spokesperson Salvador Panelo says he was instructed by President Duterte to disclose a diagram showing journalists and lawyers who are allegedly part of a supposed “oust-Duterte” plot in his Monday press briefing. —JULIE M. AURELIO

Presidential spokesperson Salvador Panelo said the President had instructed him to expose the same drawing that was published in Manila Times on Monday, but the newspaper simply beat him to it.

In a press briefing, Panelo said the Palace did not provide the drawing to the newspaper.

Titled “Association Matrix Between Bikoy and Ellen Tordesillas,” the diagram depicted the flow of anti-Duterte information from “Bikoy” to Rappler, Vera Files and the Philippine Center for Investigative Journalism (PCIJ).

It also named the National Union of Peoples’ Lawyers and members of the organizations allegedly involved in the ouster plot.

Tordesillas is a veteran journalist associated with the Malaya newspaper and Vera Files.

Bikoy was the name given to the man whose video posted online accused the Duterte family — Davao City Mayor Sara Duterte and her husband, Manases Carpio, and resigned Davao City Vice Mayor Paolo Duterte; as well as the President’s partner Cielito “Honeylet” Avanceña and their 14-year-old daughter Veronica or “Kitty” — of benefiting from the illegal drug trade.

Panelo said the Duterte administration would not file any cases against the journalists and lawyers linked to the alleged plot — for now. But he added: “If the plot thickens and they perform acts which are in violation of penal laws, then that’s a different story.”

Justice Secretary Menardo Guevarra said he had ordered cybercrime investigators to go after the makers of the videos that linked Mr. Duterte’s immediate family to drug trafficking.

“The fact-finding team may look, for instance, if there is basis for filing of a cyberlibel complaint,” he added.

Guevarra ordered the investigation after President Duterte vowed last week to retaliate against those behind the videos.

The Philippine National Police has no evidence on the destabilization plot yet. But its chief, Police General Oscar Albayalde, said he was not discounting the fact that there was a destablization plot.

Albayalde said the videos were being investigated to determine the people behind them and to identify Bikoy.

“I am sure it’s not just Bikoy. Someone is [planning] this because everything is scripted, and I am sure that requires a little financial . . . support,” he said.

In previous speeches, Mr. Duterte slammed the PCIJ for its stories questioning his family’s wealth, threatening to release an intelligence report against them and Rappler.

In his speech on Sunday night in Cabadbaran City, Agusan del Norte province, the President reiterated that he would publish the intelligence information given by a foreign country showing the extent of corruption in the media.

“Is it Monday tomorrow? It will be released. I will release it. I don’t know where the information came from. It just reached my table. But based on how it was written, I know it’s not from a Filipino. We just revised and translated it. It wasn’t written in our language,” he said.

Panelo initially declined to explain the diagram, saying he was simply instructed by Mr. Duterte to “touch on it” in his Monday press briefing.

The President also told him to just tell journalists to direct their questions to Mr. Duterte.

The Palace said the intention of the anti-Duterte plot was to discredit the administration so that the government would lose credibility.

“A government losing its credibility will be the start of its fall, because people will oppose you and believe the lies against you,” Panelo said.

He defended the release of the drawing as Malacañang’s duty to inform the people of what was happening in the administration.

While Panelo said he did not know where Mr. Duterte got the diagram, he assured the public that it was properly vetted and validated.