Nine dogs received a hero’s welcome on social media for their assistance in search-and-rescue efforts in Porac, Pampanga, after the 6.1-magnitude earthquake on Monday, April 22.

The pictures of K-9s Billy, Thunder and Farah, featured on Facebook page of photography studio Paws&Click, have 34,000 likes as of this writing. In over 2,000 comments, netizens thanked the dogs for their heroic work.

“Salute to these fine senior K9s of the MMDA (Metro Manila Development Authority) K9 Unit for their search and rescue efforts in a 4-storey supermarket building in Porac, Pampanga,” read the caption. 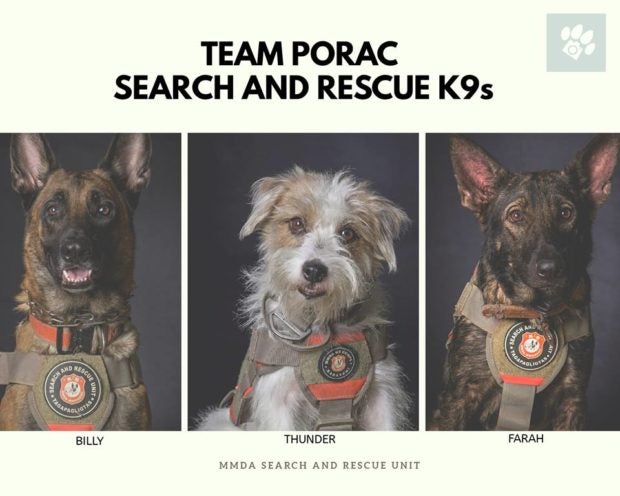 Sheryl Palcis, information and planning head of the MMDA K9 Corps, told INQUIRER.net that nine dogs were part of the Porac assignment, along with their human volunteers: Farah with Palcis herself, Thunder with Karlo Gonda, Billy with Cris Palcis, Dumbo and Chaplin with Jose Enrique Soriano, Chia with Ronald Escarte, Cody with Dominic Hornachos, Luci with Joel Luciano, and Ringo with Evelyn Cabanuatan.

During their assignment, the dogs and their handlers located one survivor and one casualty after checking in at 11:30 p.m. on Monday.

“The only challenge for the dogs was probably the weather,” Palcis said. “It was so hot that we as handlers have to let them rest after every search and make sure they were properly hydrated.”

The dogs assigned to the search-and-rescue mission in Porac had undergone years of training and were selected based on their performance and assessment, said Palcis.

“We start by teaching them how to search for their owners which will then be switched to people not familiar to them. They also undergo agility training and familiarization on different terrains,” she said.

“Working breeds are preferable but any breed can be taught how to search—even our own Aspins,” Palcis said of dogs that can be trained. Regardless of the breed, stamina is particularly important on the job.

She said the organization is open to receiving support through training locations and equipment, given that their intelligent K-9s need to be challenged constantly with new work areas.

“Our group is on a constant lookout for different areas that we can use for training, where we can simulate collapse structure rescue and tracking works with our K-9s,” she said.

“Perhaps those with properties under construction, abandoned buildings, open fields can help us by offering their sites, for at least 2 hours every week.”

The MMDA K9 Corps was founded by MMDA consultant Ramon Santiago in 2012. The organization began with MMDA employees as volunteers, and has since extended to citizen volunteers in 2016. Search-and-rescue training for dogs has been going on for the past three years.  /ra

PDEA’s 9 retired dogs up for adoption

Read Next
Iconic places of protest around the world
EDITORS' PICK
Climate Change Commission and Nestlé PH to discover sustainability-focused solutions
Work-From-Home is here to stay and requires reliable logistics
Legarda emphasizes role of ICC/IPs in nation building this IP month
TNT nears PBA crown after rout of Magnolia in Game 4
PH still at bottom of COVID-19 economic resilience ranking
Renewal of driver’s license now requires taking LTO education seminar
MOST READ
Drivers now required to take driver’s education upon license renewal – LTO
Marcos Jr’s ‘special diploma’ from Oxford: You can have it, too
Don’t do that: Robredo to supporters calling to boycott restos supportive of Marcos
OVP spox to Imee Marcos: Robredo is an extraordinary lawyer
Don't miss out on the latest news and information.