Iconic places of protest around the world

Thousands of anti-government protesters have been camped outside the Sudan army headquarters in Khartoum for three weeks, staying put to demand civilian rule even after Omar al-Bashir quit power on April 11. 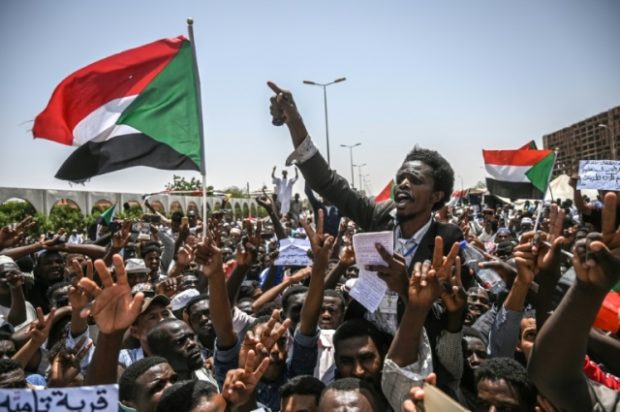 Sudanese demonstrators pushing for change have camped out in front of the the army headquarters in Khartoum for weeks, turning it into the latest icon of protest around the world. Image: OZAN KOSE – AFP

The sit-in started on April 6 and has grown in size as pressure mounts against the military authorities in scenes reminiscent of other iconic places of protest in cities around the world.

Here are some examples.

Independence Square — often known just as Maidan — was in 2013-2014 the epicenter of three months of bloody protests in Ukraine that led to the toppling of Russia-backed president Viktor Yanukovych.

The pro-Western demonstrations began in November 2013 when Yanukovych scotched a political deal with the European Union.

Hundreds of thousands of people converged on the square, setting up tents and building barricades to keep the security forces out. There were also health centers, a library, heating facilities and free food.

The tensions came to a head in February 2014 when police opened fire, killing dozens and bringing to over 100 the number of protestors killed in the uprising. Yanukovych fled.

On May 31, 2013 Turkey’s security forces cracked down on demonstrators who staged a rally against government plans to redevelop a park near Istanbul’s Taksim Square.

It sparked protests that quickly grew into the first major demonstrations against Prime Minister Recep Tayyip Erdogan since he took power in 2002.

Protesters occupied the area and put up tents, remaining on site around the clock before being evicted on June 15.

The nearly three weeks of demonstrations left four people dead and some 8,000 injured.

The massive Tahrir Square near the Nile River is most famous for the two-week sit-in that pushed Hosni Mubarak to quit in 2011 after 30 years in power.

Hundreds of thousands of protesters occupied Tahrir — which means freedom — from January 25 to February 11, sleeping under plastic sheets or at the foot of army tanks.

The revolt was one of the first in the Arab Spring uprisings.

It led to Islamist Mohamed Morsi being elected before he too was removed in July 2013.

Pro-democracy demonstrations that erupted in Bahrain in February 2011 focused on Pearl Square in the capital Manama, the site of a large monument of a giant pearl on top of sweeping arches.

People began to rally there on February 14, with the Shiite majority demanding more rights from the Sunni authorities.

After three days of protests, riot police charged the square in a pre-dawn raid that left several dead.

People returned and demonstrations escalated until security forces moved in to clear the month-old protest camp.

The Pearl Square roundabout and its central monument were razed.

One of the biggest public squares in the world, it is here that Mao Zedong in 1949 proclaimed the founding of the People’s Republic of China.

But Tiananmen Square is better known for the unprecedented weeks-long 1989 uprising that ended in a bloody crackdown.

Students, intellectuals and workers began gathering on the square in April 1989 to mark the death of a pro-reform figure and demand democratic changes.

At its peak, more than a million were assembled.

On the evening of June 3, tanks, armored personnel carriers and tens of thousands of troops converged on the square, using automatic weapons to shoot unarmed citizens.

Estimates for the number killed vary from several hundred to more than 1,000. China’s government has never released a definitive death toll. NVG