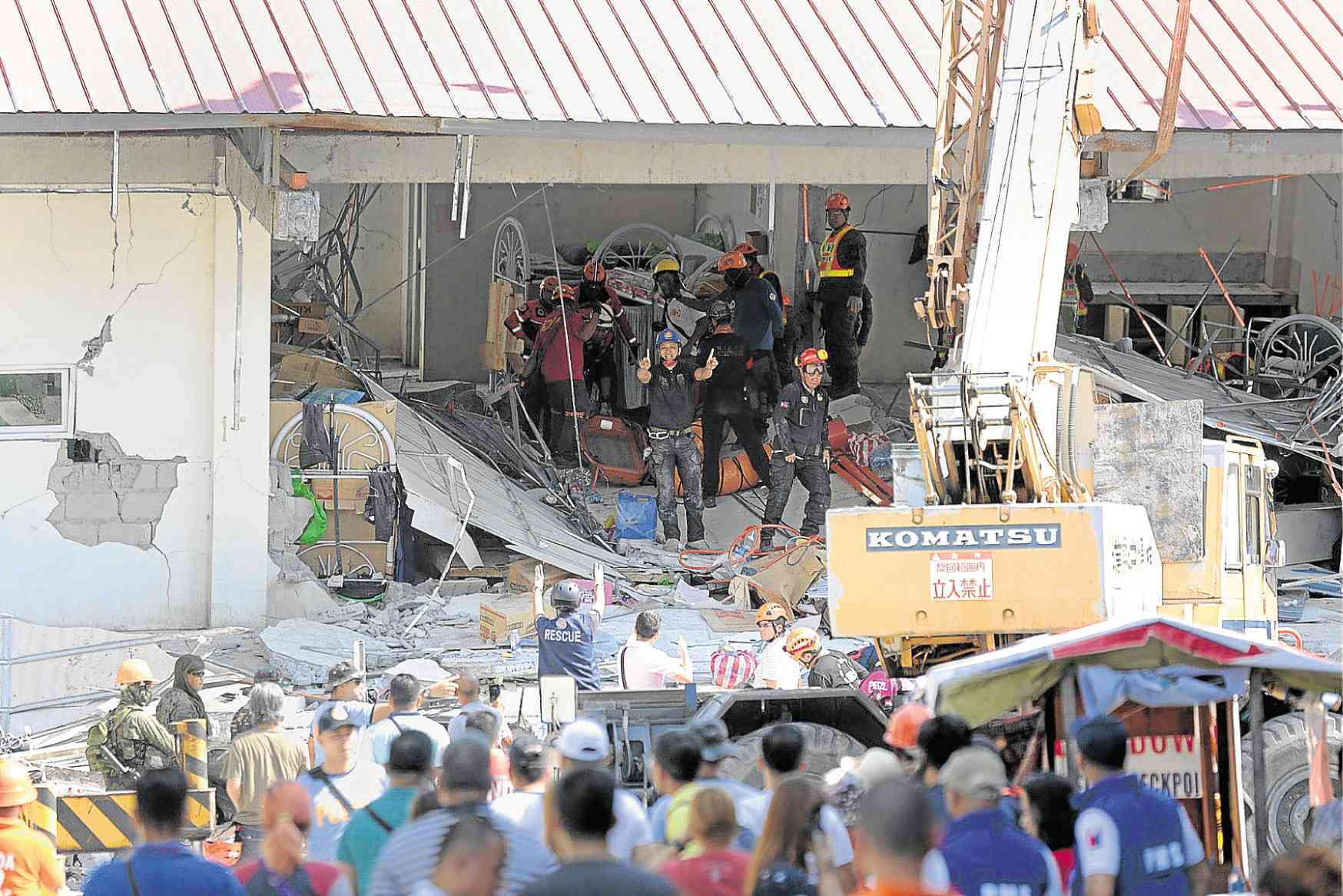 SURVIVOR ALERT A rescue worker alerts his companions that a survivor will be pulled out of the rubble of Chuzon Supermarket in Porac, Pampanga. —GRIG C. MONTEGRANDE

PORAC, PAMPANGA— Corn vendor AJ Tayag, 25, was waiting for his friends to leave their work at the four-story Chuzon Supermarket here shortly after 5 p.m. on Monday.

While chatting with other friends at the right front side of Jose Songco Lapid Cultural, Sports and Civic Center near the supermarket, Tayag said he felt the ground shaking.

“In the next seconds, it turned into a violent jolt,” Tayag said.

Sensing that it was a strong earthquake, Tayag and his friends scampered for safety.

“When I looked back, I saw thick dust billowing to the sky. Then the supermarket was gone because it had collapsed,” he said.

“That was the scariest experience of my life,” Tayag said.

At least five people were killed when the supermarket collapsed, while several others were trapped but were later rescued. Seven other people from this town’s villages were also killed.

Tayag said that his friends working in the supermarket managed to exit toward the back of the building, which was a housing subdivision.

He said he and his friends could have been one of those buried by the thick concrete walls and slabs of fallen beams and columns.

“But I’m lucky that I have a new lease on life,” Tayag told the Inquirer.

Mayor Condralito dela Cruz said three of those killed—a mother and her two children—were walking at the car park area fronting the supermarket when the earthquake reduced it into rubble.

Dela Cruz said all those earlier reported missing had been accounted for as of Tuesday night.

But he said that the ongoing clearing of debris in the collapsed supermarket was being done cautiously.

“The clearing of debris is going on quite fast because of the responders that have flocked to our town and I’d like to thank them for helping us,” he said.

Dela Cruz would not yet know the extent of damage because the town government had to attend first to the needs of those injured and the families of those who died.

But he said he had deployed several teams to do the assessment of damages in the different villages.