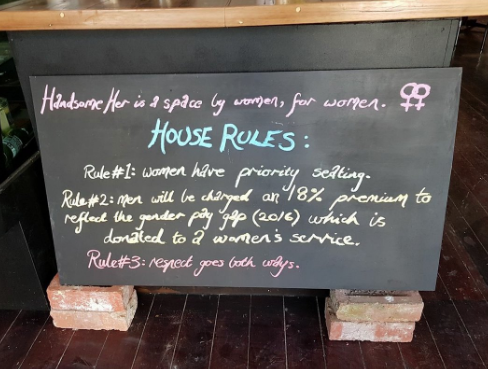 The house rules of Handsome Her in Victoria, Australia. Image: Twitter/@paigecardona

A vegan restaurant in Victoria, Australia that charged men 18 percent more than women is closing down.

Handsome Her, located in Brunswick, Victoria, first made headlines back in 2017 after their “man tax” sparked criticism all over the internet. The restaurant is known to give women priority seating and charge men an 18 percent premium, though the latter is not imposed.

The taxes, which were donated to a women’s service, were meant to raise awareness regarding the gender pay gap in Australia, where women across all industries earned 17.7 percent less than men. The restaurant also serves as a safe space for the lesbian, gay, bisexual and transgender (LGBT) community

The restaurant, however, is closing down just two years on. They took to their official Facebook page on April 14 where they invited their patrons for their final day of trade, on the 28th, with a pay as you feel scheme. The proceeds will be donated to Maiti Nepal, an organization that provides justice for victimized girls and women.

In an earlier event page back in March, titled a “A Handsome Farewell”, the restaurant spoke of how their “man tax” blew up the internet when it first came out.

“The man tax blew up the internet, an idea that we didn’t think was all too radical,” they said. “Yet the way the world responded showed us how fragile masculinity is and solidified the necessity for us to confront and dismantle patriarchy.”

The restaurant added it was not just men’s rights activists who targeted them, but also people from their own communities. On their part, they tried to encourage respectful debate and diverse opinions instead of hostility.

“For practical and principled reasons, we have not engaged in online nastiness or responded to pile-ons and have instead gone back to the old school, real-life concept of human interaction to tackle big questions and create meaningful and long-lasting relationships,” the restaurant stated.

The owners did not mention the exact reason for their closing down or if it may have something to do with the backlash they received. Nevertheless, they promised their loyal patrons that a new business is in the works.

“We are off to our next adventure up north where we will be doing some hands-on work…” said the owners. “While it is a shame to lose the physical space (and we understand how essential it is for women and lesbians to hold space), we leave knowing that the communities we have made transcend the trendy vegan café on Sydney Rd, Brunswick.” JB

‘Battered Wife’ restaurant forced to close down over controversial name