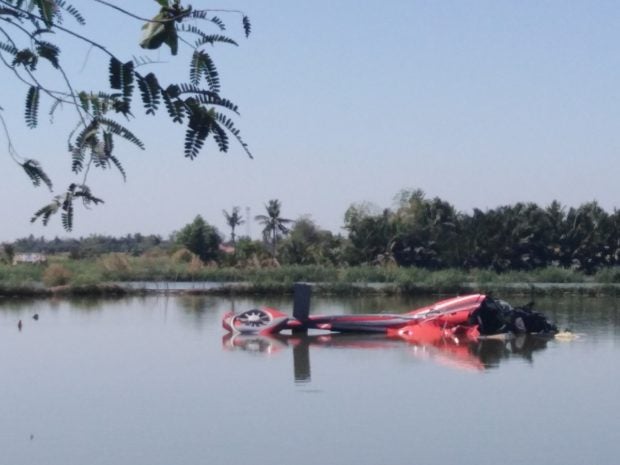 The wreckage of the helicopter that crashed into a fishpond in Bulacan on Thursday. INQUIRER photo / Carmela Reyes-Esterope

CITY OF MALOLOS–A helicopter crashed into a fishpond in a village here about 12:30 p.m. on Thursday, killing three passengers.

UPDATE. Death toll rose to 3 in a helicopter crash in Malolos, Bulacan. Other injured passengers were already transported by our @philredcross team to Bulacan Medical Center.

Investigator Police Corporal Danilo Torres also confirmed to INQUIRER.net in a phone interview that three passengers, including its pilot, have died.

Another male passenger was taken to the nearest hospital due to injuries sustained after the crash, Bersaluna said.

The passenger was later declared dead by its attending physician.

After the Police Regional Office 3 received information about the crash, the Bulacan police dispatched teams to conduct search and rescue operations as there might be other victims who needed help.

It was not immediately known where the helicopter came from and where it was headed.

The Bulacan PNP said police personnel are also responding in the area to investigate the crash.

The Philippine Red Cross (PRC) said around six passengers were on board the helicopter.

A private helicopter crashed in a fishpond in Brgy. Anilao, Malolos Bulacan at 1:04 this afternoon, April 25. PRC dispatched an ambulance and a medical team and coordinated with local authorities. The team immediately provided first aid and CPR to affected passengers. pic.twitter.com/lFJH0zKc2i

Authorities have yet to identify the victims. /jpv

Read Next
Namfrel awaits Comelec accreditation of ‘Open Election Data’ project
EDITORS' PICK
Acer starts the year off strong with the Aspire Vero National Geographic Edition
Comelec division junks petition to cancel Marcos COC for president
PH logs 37,070 more COVID-19 cases; over 33K others recover
The best of bayside and city living at SMDC’s Sail Residences
‘Not yet the end’: Lawyer says Marcos Jr’s DQ cases to take lengthy process
Over 3 Million worth of prizes to be won at Smart Padala’s SENDali Manalo Promo!
MOST READ
NBI foils escape attempt of Kerwin Espinosa, two others
Marcos camp ‘extends hand of unity’ after COC cancellation bid is thrown out
Wendell Ramos finally gets to hold his newborn for the 1st time
No vaccine, no French Open for Djokovic, says French Sports ministry
Don't miss out on the latest news and information.