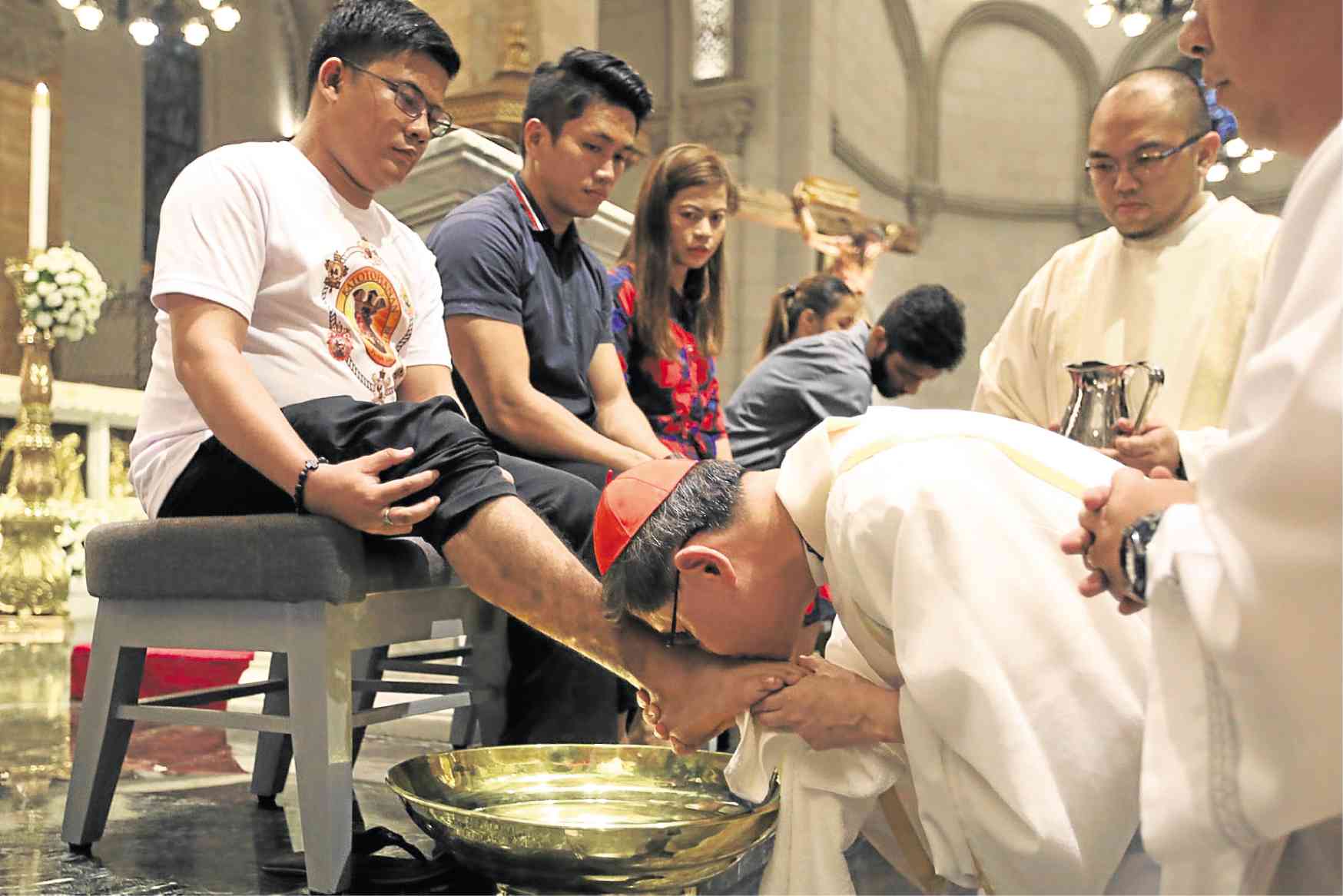 LOVE AS A LIFELINE In his Easter Sunday message, Manila Archbishop Cardinal Luis Antonio Tagle, seen here kissing the foot of a Catholic faithful during the Maundy Thursday Mass, urges Christians to show “intense moments of love” as a way to overcome despair. —PNA PHOTO

MANILA, Philippines — In the face of “unrelenting evil,” Manila Archbishop Cardinal Luis Antonio Tagle urged the faithful to see that small acts of kindness could help transform families and communities from “prisoners of despair” into “bearers of hope.”

In his Easter message, Tagle said that one may ask where love was especially during times when “life is hard or when we see injustices destroying lives.”

“Sometimes we find ourselves in a dark place, like Jesus on the cross, and our lives can seem loveless. When hunger, unemployment, addictions, indignities, abuse, hate speech, false accusations, killing, corruption, human trafficking run wild and seem to reign, our world appears dark,” Tagle said.

The prelate was referring to some of the most serious contemporary problems and social issues that Filipinos are grappling with.

He said that it is in these situations, which he likened to Jesus’ path to crucifixion, that hate also came with “intense moments of love.”

In Biblical accounts, such love was revealed, he said, when John, Mary and other women remained at the foot of the cross after everyone else had abandoned Jesus, when the thief asked Jesus to remember him in his kingdom, and even Pontius Pilate, who saw the “injustice of the situation” and wanted to free Jesus.

“What difference can one act of kindness make in the face of unrelenting evil? It can make all the difference in ways we can’t even imagine how because these small acts of care and love are crowned by the total self-giving of Christ crucified on the cross,” Tagle said.

“Since the time of Christ, our faith has been built on personal encounters and on people who empty themselves, enabling them to see people and their situations with deep understanding, compassion and solidarity,” he added.

Do not judge others

Tagle reminded Christians not to judge other people they encounter or pretend to have the answer to all their problems.

“It is through these encounters of love and caring that persons, families and communities are transformed from prisoners of despair into bearers of hope,” he said.

Tagle stressed that love is about “seeing, encountering and understanding other people.”

“It is the lifestyle of being with and living for others in the belief that light will always overcome darkness,” he said.