A clan’s ‘Dalene’ devotion: She can be a model for millennials 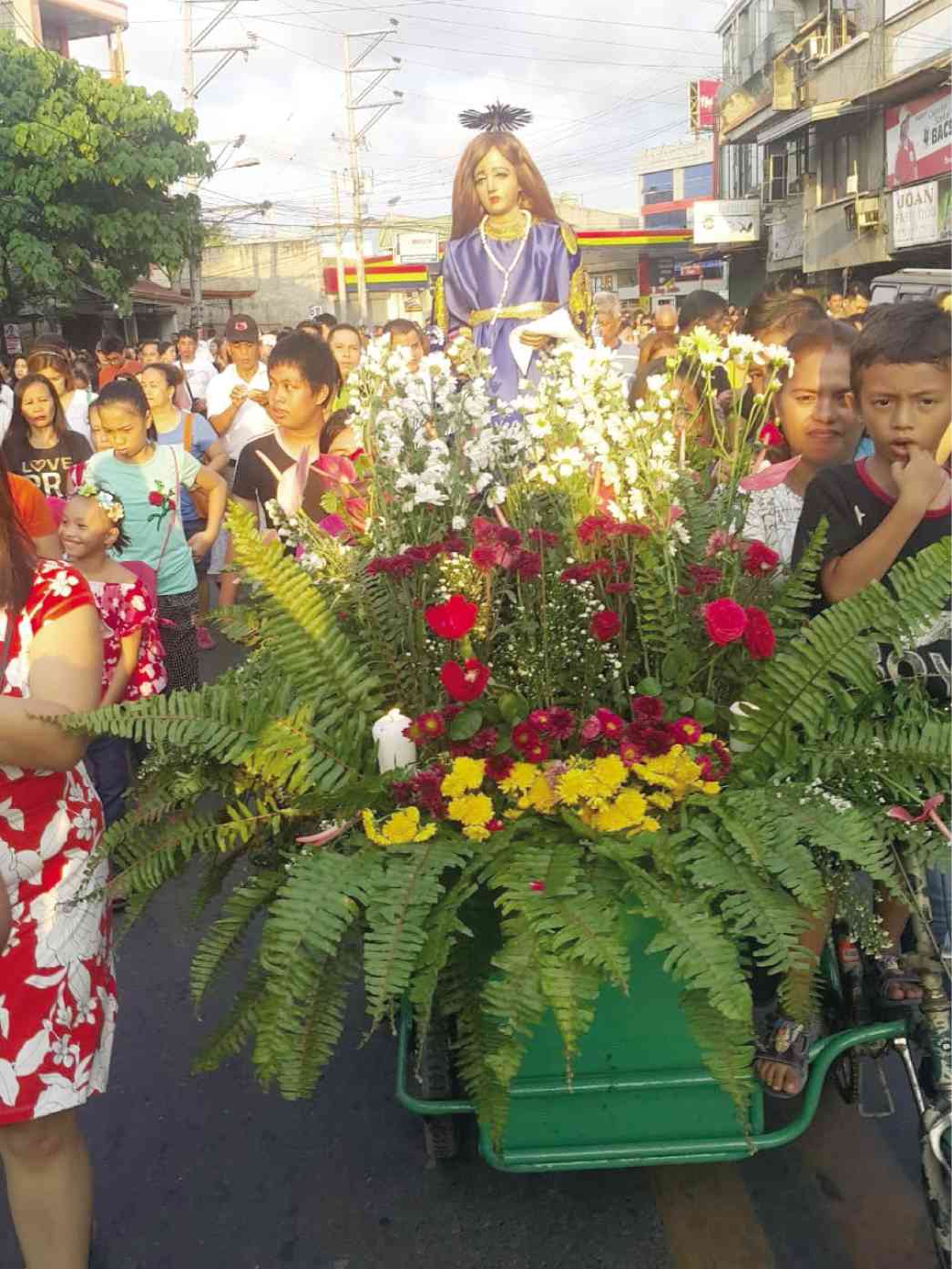 CELEBRATING THE MAGDALENE The image of Mary Magdalene, the woman who proclaimed the joy of the Easter message, has been part of the Santo Entierro procession in Iligan City these past 25 years. —AHRON TALINGTING/CONTRIBUTOR

MANILA, Philippines — Catholics around the world mostly remember Mary Magdalene as the first witness to the empty tomb of Jesus — a key proof of his resurrection on Easter Sunday.

But for a clan in Iligan City, Mary Magdalene is a faithful disciple who deserves the honor of being part of the Santo Entierro (Holy Burial) procession on Good Friday.

So there she was, the image of Mary Magdalene in a “carroza” (decorated float), just behind the carroza of Mary in mourning black, St. Joseph, and the Santo Entierro, the image of the dead Christ.

“It has been the family practice for years to have Dalene (pet name for St. Magdalene) join the Santo Entierro,” said Arlene Talingting, the eldest great-grandchild of Maria Esperanza Naval, who started the family’s devotion to St. Magdalene more than 25 years ago.

Talingting said her great-grandmother was a very religious woman and a devotee of many saints, though her favorite was Dalene.

Maybe it was because her great-grandmother did not have a conventional love life: her children have different family names. St. Magdalene must have strengthened her faith in a God who forgives sinners, Talingting added.

Dalene could be a model, too, for millennials who may have complicated lives and relationships, and who seek meaning in their lives, Talingting said.

Talingting said she did not know where the wooden image with eyes made of ivory came from or who made it, but she remembered clearly that in the big fire in Mahayahay in Iligan City a few years ago, which burned down their ancestral home, Dalene was unscathed except for her clothes, which used to be purple with gold trimmings and a cape.

The clan’s devotion seemed to gain affirmation when Pope Francis, in June 2016, recognized St. Mary Magdalene’s role as a “true and authentic evangelizer,” and raised her July 22 memorial to a feast, the same rank given to the liturgical celebration of the Apostles.

The decision to honor her seeks “to reflect more deeply upon the dignity of women, on the new evangelization and on the greatness of the mystery of God’s Mercy,” the decree said.

It added that “St. John Paul II paid great attention not only to the importance of women in the mission of Christ and the Church, but also and with special emphasis on the particular role of Mary of Magdala as the first witness who saw the risen Christ, and as the first messenger who announced the Lord’s resurrection to the Apostles.”

It calls St. Mary Magdalene “an example of a true and authentic evangelizer … who announces the central joyful message of Easter.”

Bible scholars have noted the significant role of the Magdalene not only in the resurrection of Christ but also in his passion and death.

Maureena Fritz, founder of Bat Kol Institute of Jewish Studies for Christians based in Jerusalem, said that among the women in the Bible, Mary Magdalene plays a very important role and is named more often than most of the apostles. She is most prominent in the narrative of the crucifixion of Jesus, at which she was present.

With Mary, the mother of Christ,  Magdalene stood at the foot of the cross of Jesus and witnessed his burial. Evangelists John and Mark specifically named her as the first person to see Jesus after his resurrection.

Fritz said: If women were allowed to be as prominent in the church today as they were with Jesus and his early followers,  the Church would have a much more attractive face and be more fruitful than it is today.

Yet, like in modern-day television dramas, Magdalene was not given the prominence she deserved.

For centuries, she was marginalized and vilified as a prostitute. Her popular image, depicted in paintings and films like “Jesus Christ Superstar” or “The Passion of the Christ” is that of the repentant sinner, the temptress and fallen woman redeemed by Jesus’s mercy. There were stories about her as Jesus’ lover or as a  foil to the purity of the Virgin Mary.

What or who caused the misinterpretation? A number of writers mentioned the sermon preached by Pope St. Gregory in  591 where he identified as one person the New Testament figures of Mary Magdalene, the sinful woman who anointed Jesus’ feet and washed them with her tears, and the Mary who was the sister of Lazarus and Martha of Bethany.

A British film by Garth Davis (starring Joaquin Phoenix and Rooney Mara)  released in March last year aims to right this wrong and to tell her true story. It seeks to present the traditional, first century Judean woman who refused to go through an arranged marriage, not out of some unlikely feminist determination, but in a quest to find God and devote her life to Christ’s service. It seeks to discover the Mary of the original gospels, the person who was the most significant woman in Jesus’ life other than his mother, and who was a major figure in early Christianity.

The 2016 Vatican decree elevating Magdalene’s memorial to a feast said that a study was done to check on the separate or unified identities of the three Marys.

The result made the Vatican change its calendar and honor Magdalene as a “holy woman” like the other apostles and as “an example and model for all women in the Church.”

Is Mary Magdalene a prostitute or a saint?

For Talingting, it does not matter. Dalene has been a unifying force in her clan—the Naval, Zalsos, Partulan and Talingting families. During Holy Week, family members including non-Catholics contribute to pay for the flowers, Dalene’s new dress,  and whatever it takes to get her ready for the Santo Entierro procession.

Said Talingting:  “As a person, I am not judgmental. I myself am a mother of two children but I am not married.”