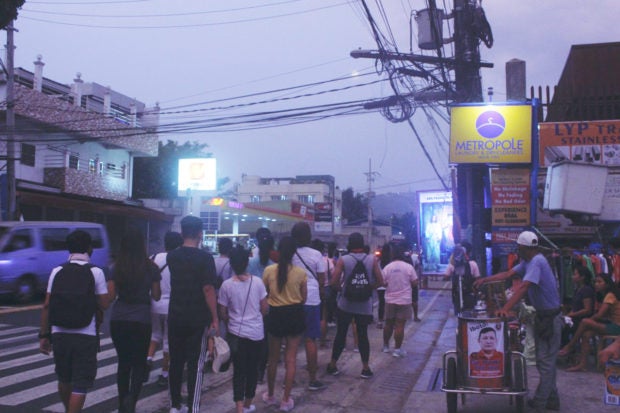 MANILA, Philippines — Heading on foot toward the Antipolo Cathedral every Maundy Thursday, known as the “Alay Lakad,” has been a tradition for most Filipino Catholics who would like to take part in the sacrifice of Jesus Christ more than 2,000 years ago, when he died on the cross.

The long walk may pale in comparison to Christ’s sufferings, but it is still no easy feat given that pilgrims, even the physically fit ones, have to stop and rest for some time.

Sumulong Highway is a long road — the distance from Masinag on Marcos Highway to the Our Lady of Peace and Good Voyage Church alone is already 11 kilometers.  But aside from that, this is also an uphill trek, as the road was made to slither the mountainous parts of Antipolo City.

According to Lola Pilar, who did the pilgrimage for the third time this year, enduring the long-distance walk needs several stops to make it.

She and her fellow devotees arrived in Masinag around 7:00 p.m. of Thursday, and they expect to reach the cathedral by 2:00 a.m. of Good Friday — basically a seven-hour journey.

When asked if she was doing it for a prayer she needs an answer, the 59-year-old woman said she has no particular wish from God.

Lola Pilar’s group is just one of the thousands of Antipolo pilgrims, but hers is also one of the few to make stops along Stations of the Cross set up along Sumulong Highway.  A lot of groups — made mostly of young people —  have noticeably skipped the stations which some consider integral to the pilgrimage.

Several onlookers who have lived most of their lives in the area have similar sentiments: that the “seriousness” of the Alay Lakad is being set aside.

However, some say that nothing has changed with the tradition, claiming that even before there were groups that really took the procession sincerely while others joined just for fun.

Guzman’s family owns a canteen business along Sumulong Highway, which serves as a refuge for tired pilgrims.  According to her mother Antonita Silverio, who has managed the business for more than 23 years, the decrease in pilgrims has been noticeable.

Other food stall operators whose stores remained open until the morning of Good Friday to accommodate returning pilgrims have the same observation, as far as their income is concerned compared in the past.

The complaints of the elderly are not unfounded: young people taking part in the Alay Lakad appear like they are headed to a basketball game — cheering, sometimes jokingly shouting invectives at each other.

Whenever members of the media would take photos or videos of the event, most of them would display wacky pose in front of the camera, hoping to be included in the footages for the Holy Week.

Then this netizen who posted on Facebook how some pilgrims showed lack of discipline when they left heaps of trash at the doorsteps of Antipolo Cathedral,.

However, they also clarified that they are not only heading to Antipolo for the selfies, for the fanfare, or just because of the thrill.

Another group of young people, who refused to give their names, countered that their boisterous nature does not mean they are troublemakers.

Authorities from the Antipolo Police Station and Barangay Mambugan attested that this year’s Alay Lakad has went on smoothly, without any reports of untoward incidents.  Police stationed in Masinag and in other posts on the way to Antipolo said they do not expect the situation to change.

Some residents of Antipolo did not made the long walk but they still actively participated in the Alay Lakad by helping pilgrims.  Hundreds of volunteers were utilized to maintain decorum during the procession, while there were others who helped in their own little way.

Members of a motorcycle riders’ group assisted tired people by giving them free water and packed food along the way.  According to the group’s officials, this has been a yearly routine and devotion for each of them.

Most of the funds used to purchase the food come from members’ contributions and also from the sales of a motorcycle shop.

At the end of the day, the dynamics of a tradition may change, as the next generation gets involved with the community’s culture.

However, the question stands: is it good enough for people to treat traditions seriously, or will it be better if people enjoy in each other’s company, never mind being irreverent to some religious practices?

It appears that the answer rests among the real observers–the people of Antipolo themselves–saying there are people who chose to use the pilgrimage on a level where it is appreciated as a time to bond with family and friends, a time to help people, a time to take advantage of, and not solely as an exercise of faith.

It may be best exemplified in the reactions of a first-time pilgrim who received food from the riders.  According to him, he did not expect that there would be volunteers helping out other people.