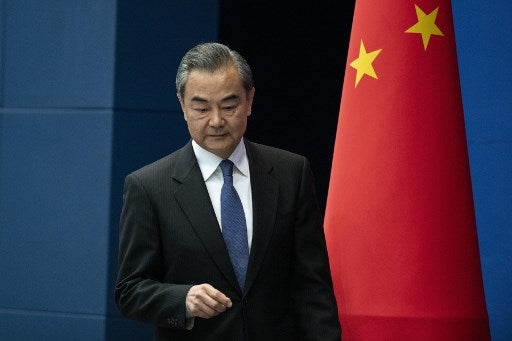 China’s Foreign Minister Wang Yi arrives for a press conference briefing on the Belt and Road Summit at the Ministry of Foreign Affairs in Beijing on April 19, 2019. AFP

BEIJING, China — China said Friday leaders from 37 nations and North Korean representatives will attend a summit for its Belt and Road Initiative next week as it hit back at criticism of the massive trade infrastructure project.

The Belt and Road Initiative has divided Europe, and Washington has called it a “vanity project”, but a growing number of nations are signing up despite warnings about debt and opaque deals that favor Chinese firms.

Italy became the first G7 member to join the scheme this month and will be among the 37 nations represented at the leader level at the April 25-27 summit in Beijing, Chinese foreign minister Wang Yi said at a press briefing.

Most other nations on the list have traditionally warm ties with Beijing, including most of Southeast Asia and eastern European countries that were former members of the Soviet bloc.

The United States has said it will not be sending a high-level delegation.

Wang said that “China’s neighbor North Korea” will be sending a delegation.

“This is very normal because it is an economic cooperation initiative… but (no countries) have the right to prevent others from participating,” he said.

He did not say whether leader Kim Jong Un, who will meet President Vladimir Putin in Russia this month, would participate.

There has been growing concern over China’s Belt and Road ambitions, with many western leaders calling the projects “debt traps.”

Last year, Sri Lanka had to give a 99-year lease to China on a deep sea port after it was unable to repay loans for the $1.4 billion project.

But Wang hit back at criticism, saying that those who are are unable to do something well should not prevent others from doing it.

“This sort of mentality is unconstructive and not helpful to others,” Wang said.

While some see the project as a geopolitical powerplay, Beijing has insisted that the Belt and Road is open to everybody.

“I want to emphasize that this sort of partnership is not a geopolitical tool, but a platform for cooperation,” he added. /ee