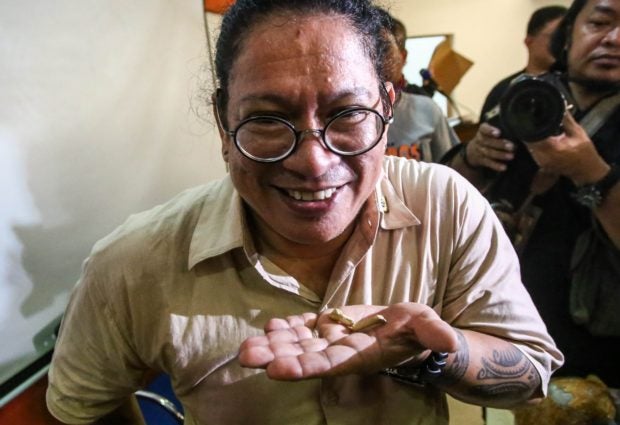 PEÑABLANCA, Cagayan — Barely a day after announcing the breakthrough discovery of the remains of a prehistoric human species found at a cave in Cagayan province, University of the Philippines (UP) scientist Armand Salvador Mijares took off for another excavation project last Friday, this time at a cave in Bulacan province.

Mijares, according to friends and acquaintances, is all “pumped up” in his continuing quest to explore the country’s wealth of resources in the history of human evolution.

“He’s naturally excited. One discovery as significant as this would really get one well pumped up,” said Eusebio Dizon, Mijares’ professor and mentor at UP and a member of the Callao archaeological team.

Mijares, along with a team of Filipino, French and Australian archeologists, took the world of anthropology by storm last week after he announced the discovery of Homo luzonensis, a prehistoric human species previously unknown to science.

Before its declaration as a distinct species, the fossil find in Cagayan had been referred to by scientists as “Callao Man,” after the cave system that spans five villages in Peñablanca town on the foothills of the Sierra Madre mountain range.

From an obscure find devoid of any definitive identity, Callao Man suddenly attained rock star status wordwide overnight, thanks to the scientists’ recent discovery of a prehistoric human species previously unknown to mankind.

Its new name is derived from Luzon, the main island in northern Philippines on which the species is believed to have lived.

According to Dizon, Mijares and his team considered Philippinensis as a name for the species, but this had already been assigned to a parasitic nematode that was first discovered in northern Luzon in 1964.

Before the recent discovery, the entrance to Callao Cave in Barangay Quibal barely caught visitors’ attention. A small sign, hung on a steel fence, guarded the dig sites where prehistoric human remains had previously been found as well—the earliest human remains found on earth.

Ever since the H. luzonensis announcement on Thursday, Callao Cave supervisor Teodolfo Babaran has noted a spike in the number of daily visitors.

Babaran, who also manages the lodge that housed the archaeological team, saw how Mijares and his colleagues did months of studies at the cave, spending hundreds of hours sifting through mounds and mounds of dug-up earth.

Prior to the actual dig, Mijares spent days securing permits from government agencies, gathering a support group among the locals, securing all the logistical needs of his team, and preparing the site for excavation, he said.

“They would take off early in the morning just after breakfast, and head back to the camp after sunset, dog-tired. They would usually freshen up with a dip in Pinacanauan River on their way back,” Babaran said.

“People watching them sometimes wondered why they had to be so meticulously slow at digging,” he added.

Dizon did not hide his admiration for his prodigy’s patience and persistence in pursuing his projects, not only at Callao but at other sites as well.

“To his credit, he never stopped looking for grants to fund his projects. At times, when we were already about to give up, he would still hang on,” he said of Mijares.

Mijares began his excavation at Callao Cave in 2003 as part of his dissertation for doctorate study at UP. Months of diggings yielded nothing. But just when his colleagues thought it was time to call off the dig, he told them he still saw some “encouraging signs.” He plodded on.

In that study, he said he aimed to “understand the transition from the stratigraphically lower flake tool assemblages found in the caves into the upper Neolithic assemblages that are found both in the caves and in the open sites (by) looking for evidence of changes in material culture and subsistence strategies through time.”

The team’s excavation in 2007 unearthed a breakthrough—a foot bone that belonged to a human. It would be confirmed later as the earliest human remains in the country, at about 67,000 years old.

After getting additional funding, Mijares and his team returned to the cave in 2009, but failed to make significant progress.

The promising results of the dig encouraged Mijares to push on. “We were hoping to get at least a human mandible,” he said.

Four years after the major dig discovery, the team found another molar that, according to Mijares, confirmed the existence of the same human species from at least three individuals—two adults and a juvenile.

The team subjected their fossil finds to months of laboratory identification and DNA analysis, uranium-dating, and years of consultations with other global experts in archaeology, according to Dizon.

“This is the reason it took more than five years from the last find before this announcement,” he said.

According to Mijares, scientists agreed that their fossil find belonged to a different species, after these exhibited a “mosaic” of different modern H. sapiens features, as well as archaic characteristics.

H. luzonensis’ teeth had multiple roots as opposed to one or two for modern humans, Mijares said. It also possessed the smallest teeth among the Hominin species.

Hominin refers to a group of modern humans, extinct human species and all their immediate ancestors, including members of the genera Homo, Australopithecus, Paranthropus and Ardipithecus.

Scientists noted H. luzonensis’ curved finger and toe bones, which supposedly suggest that climbing was an important activity for the species.

In addition, H. luzonensis’ premolars were big in relation to its molars, Mijares said.

“One thing that differentiates Homo luzonensis from other homo is the strong development and proximal projection of the dorsal beak, which indicates that this is a strong individual,” he said.

According to Dizon, the discovery makes the Philippines the new “rock star” in the world of archaeology.

“Before this, scientists were not minding us. But now, we got their attention,” he said.

Now the property of the Philippine government, the fossils of H. luzonensis would be turned over to the National Museum. This also opens up prospects for Mijares and his team to conduct further excavations at Callao.

At the same time, the findings confirmed the significance of the Callao system as an archaeological site, prompting the provincial government of Cagayan to seek its declaration as an important cultural property by the National Museum.

Aside from Callao, the nearby caves at Musang and Lattu-Lattu have been made off-limits to the public, after earlier studies confirmed that these contained important archaeological artifacts.

“[The discovery of H. luzonensis] would give us enough reason to be proud as people of Callao, and more reason to protect it. We hope to be able to educate all those who visit the caves about its significance to the history of human evolution,” Babaran said.