Ready or not: What happens in case of no-deal Brexit | Inquirer News

Ready or not: What happens in case of no-deal Brexit 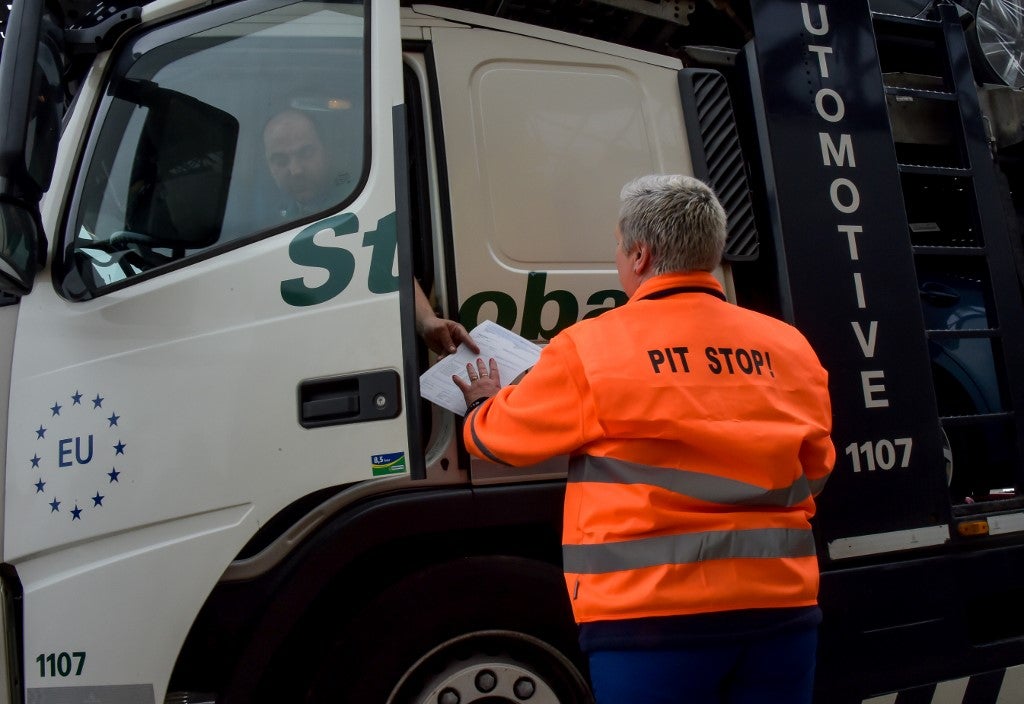 A Eurotunnel agent controls documents of a truck driver, on March 28, 2019, at the Coquelles Eurotunnel border post, a new border inspection post for customs and sanitary control built in anticipation of a no-deal Brexit. Under EU rules, animals, fresh food and agri-feed from Britain will be classified as being from a ‘third country’ post-Brexit, with checks for disease, traceability, rules of origin and welfare mandatory on the French side. AFP

LONDON, United Kingdom – Britain faces the prospect of breaking ties with its closest trading partner without a deal on Friday — unless EU leaders agree on an alternative at a crucial summit on Wednesday.

Here are the main ways Britain would be affected in case of a “no-deal” ending to the 46-year partnership.

Around 80 percent of British companies judged themselves ready for a “no-deal” exit, according to a Bank of England survey published on March 21, up from 50 percent in an equivalent January survey.

However, it also said many companies noted that the potential impact on tariffs, border frictions, exchange rate movements and recognition of regulatory certifications “were outside their control”.

In February, the government said just 40,000 of 240,000 businesses that trade only with EU nations had obtained the required customs clearance numbers.

Britain will default to “third country” status with the EU, with trade relations run on World Trade Organization rules.

While the EU’s average tariff rate for third countries is low – around 1.5 percent — they are bigger in certain sectors: for cars, the rate is 10 percent.

Britain will also lose access to major markets covered by EU trade agreements, although it has managed to replicate some of these, including with Switzerland and Israel.

The EU says it would immediately begin customs checks, food safety inspections and verification of EU standards at its border with Britain, leading to long delays at busy crossing points.

Britain has moved to open up new routes and increase links from other ports to ease the pressure on the most important, Dover.

The government says it does not expect shortages of food, although there could be a reduction in choice of perishable goods, but MPs have expressed concern about “panic buying.”

Britain says it would not immediately apply customs checks on the border with EU member Ireland, to avoid raising tensions in the once conflict-ridden province of Northern Ireland.

But the EU says it would insist on monitoring goods moving across what will become the bloc’s external frontier, although it would try to make these as minimally intrusive as possible.

Britain has suggested it may have to reimpose direct rule over Northern Ireland to manage a “no deal” situation, as the devolved government in Belfast has been suspended since January 2017 in a row between the two power-sharing parties.

An estimated 3.5 million European citizens live in Britain, and around one million Brits are settled in the EU.

Britain and many other member states have already offered to protect their rights, although their long-term status would have been more clearly defined in May’s thrice-rejected withdrawal deal.

British citizens traveling to the EU will be limited to 90-day stays and would immediately be subject to tighter passport checks.

The British government has asked drug companies to stockpile six weeks’ supply of an estimated 7,000 prescription or pharmacy-only drugs that come from the EU.

Ministers say the transportation of medicines will be prioritized and those with short shelf-lives, such as medical radioisotopes, could be flown in.

Some stop-gap agreements have been reached on both sides including a one-year agreement to protect the massive financial derivatives market in London.

Traders buy these complex but vital financial instruments to insure themselves against sudden interest or exchange rate swings.

The EU has agreed to allow flights from the UK into the other 27 member states to continue until March 2020, if London reciprocates, but airlines might not be able to make intra-EU connections.

Another time-limited deal will allow trucks to keep carrying goods in and out of Britain — provided London gives reciprocal treatment to EU operators.

The high-speed train link through the 50-kilometer Channel Tunnel running between Britain and France will be kept open for three months, as long as Britain adopts EU rail safety standards. /cbb