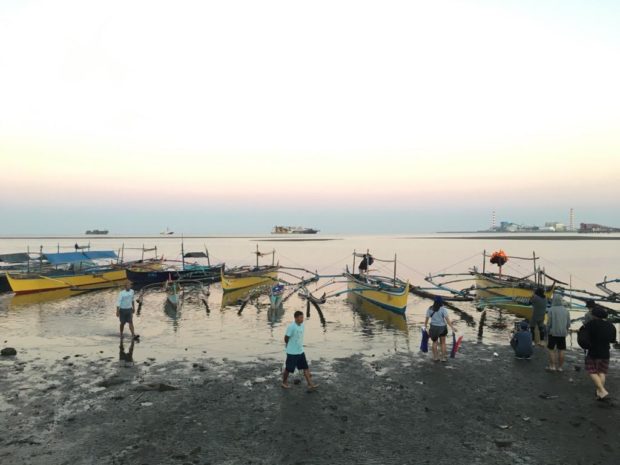 This photo taken in February 2019 shows three Chinese dredgers docked near the shorelines of Masinloc in Zambales. PHOTO from Bayan Muna

MANILA, Philippines — Aside from Chinese ships recently spotted in Batangas and the fleet of fishing vessels seen on Pag-asa Island, Bayan Muna chair Neri Colmenares is claiming that there are also dredging and quarrying ships in Zambales.

The former lawmaker said he personally saw three vessels docked offshore in the town of Masinloc. He said local fishers had also sent him photos of Chinese crew members in the municipality of Cabangan.

“When we filmed our documentary on the West PH Sea last February 16, we observed [that there were] at least 3 Chinese dredging ships anchored offshore in Masinloc, Zambales,” Colmenares said in a statement on Wednesday.

“I personally rode a bangka (boat) to get near and see the ships for myself. Fishermen also sent me pictures of quarrying ships with Chinese crew in Cabangan, Zambales,” he added.

Colmenares provided reporters a copy of the photo and video of the Chinese dredgers.

“Now our sources from Zambales are saying that there are currently five to six Chinese dredgers in the area. The question is why is the government allowing China to mine and destroy our shorelines?” he asked.

The Armed Forces of the Philippines (AFP) recently revealed that they had spotted an “extraordinary surge” of vessels in the West Philippine Sea. AFP Chief of Staff General Benjamin Madrigal, however, brushed it aside, saying it is not a cause for concern.

READ: AFP chief: Chinese ships near Pag-Asa Island no cause for worry

On Tuesday, residents of Lobo, Batangas were alarmed with the sudden appearance of a 12,990-ton hopper dredger from China, believed to be transporting sand from the province to be used in building a runway at the Hong Kong International Airport.

Colmenares alleged that China’s confidence in pulling off these actions is a result of the Philippine government’s backing of its projects.

“Residents in Cagayan, Ilocos, Pangasinan, Zambales, Leyte, and Negros have long been complaining about China’s destructive black sand mining activities, but they have been ignored,” the senatorial bet noted.

“It seems China has become more confident of government support and is now looking at other areas to mine like Batangas,” he said. “Inagaw na nga nila ang karagatan sa West PH Sea, ngayon pati dalampasigan natin kukunin nila at dadalhin sa China (They got the West PH Sea, now they are also trying to get our shorelines),” he claimed.

In a press conference on Tuesday, Colmenares called on Filipinos to stand up against China’s exploitation of the country’s resources by joining protest movements. His group and personalities bared plans to stage a protest outside the Chinese consulate office on April 9, Araw ng Kagitingan. /ee

READ: Colmenares: If gov’t doesn’t act on West PH Sea, we will