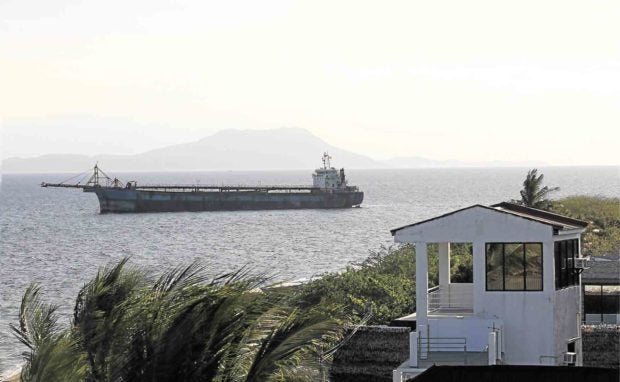 VESSEL IN WAITING The MV Emerald, a 12,990-ton hopper dredger with a crew from China, is anchored off Lobo town, awaiting a decision by Philippine officials on whether it could start digging for sand in a 6.5-kilometer stretch of the Lobo River in Batangas province. —LYN RILLON

The sudden appearance of a large Chinese-manned dredging vessel not only caused alarm among residents of a fishing village in Lobo town, Batangas province, but also unraveled a plan by a private company to ship tons of sand from their river to build a runway of Hong Kong International Airport, the Inquirer learned on Tuesday.

The MV Emerald, a 2,990-ton hopper dredger suddenly appeared off Barangay Lagadlarin on Thursday and anchored close to its 30-hectare mangrove forest, according to village chief Mafriel Dimaano.

The 99-meter-long, 17-meter-wide ship sailed into Lobo’s waters without prior notice or permission from local officials, Dimaano said on Tuesday.

“Why would a ship that big suddenly dock here when we don’t even have a pier?” Dimaano told the Inquirer.

It was not until Monday that a representative of Seagate Engineering and Buildsystems visited Lagadlarin and apologized for causing alarm. He explained that the company had planned to put up signages regarding a project to dredge the Lobo River, Dimaano said.

“I went totally hysterical and raised my voice at him. I told him, how come their ship came ahead and only thought of putting up signages afterwards. We were not informed at all,” he said.

Lobo Mayor Jurly Manalo said Seagate’s representative, who was not immediately identified, cited a supposed deal struck between the company and a former mayor in 2008 to dredge the river, but this did not push through. He said the company representative showed an environmental compliance certificate (ECC) issued for the project in 2018 by the Environmental Management Bureau (EMB).

The mayor ordered the ship to leave, but it remained anchored off Lagadlarin on Tuesday.

The Inquirer has learned that the former mayor was Manalo’s younger brother, Virgilio, who was authorized by the municipal council then to enter into a memorandum of agreement (MOA) with Seagate to dredge the river.

According to documents seen by the Inquirer, the council, through an Oct. 28, 2008, resolution, authorized then Mayor Virgilio Manalo to enter into a MOA with Seagate to dredge “180,000 square meters and expandable as necessary” of the Lobo River for flood control.

But it was only almost 10 years later, on July 6, 2018, that Seagate obtained the ECC from the Calabarzon regional office of the EMB for the “desilting, dredging and remediation” works for the Lobo River Basin Periphery Project.

One document dated Feb. 28, 2019, seen by the Inquirer was a purchase order made by a company called Synergy Plus Holdings Ltd. to Seagate for the purchase of 2 million cubic meters of Lobo River sand for $2 per metric ton “at source” to be used for the Hong Kong International Airport Three Runway System Project.

It was unclear whether Seagate could export the sand or even begin the dredging because the regional Mines and Geosciences Bureau office denied the company’s request in February for a mineral ore export permit and the current officials of the town were against the dredging.

Batangas Gov. Hermilando Mandanas also said he was not aware of the ship’s arrival and had not issued any dredging permit.

Police Lt. Col. Crisostomo Ubac, chief of the Batangas Police Maritime Group, said the ship dropped anchor just 500 meters from the shore, which happened to be a mangrove reserve.

Lobo is part of the Verde Island Passage, a marine sanctuary being what scientists call the world’s center of the center of marine shorefish biodiversity.

Scientists say mangroves help prevent soil erosion in areas with strong waves, remove dirt and pollutants from the land and could even act as a buffer to storm surges brought by strong typhoons. They say mangroves also help in the healthy growth of seagrass and coral reef ecosystems.

Manalo said barangay officials were prevented from boarding the ship. Only members of the Philippine Coast Guard (PCG) and the Batangas and maritime police, who arrived at the village on Friday afternoon, were allowed to board.

“I was also afraid it carried drugs so I asked for the [assistance of] PDEA (Philippine Drug Enforcement Agency),” Manalo said.

No firearms or illegal drugs were found on the ship.

No basis to arrest

Ubac said at least nine Chinese men were on board, while Lobo Mayor Jurly Manalo said they might be from Taiwan after he spoke with one of the crew members on Saturday.

“I asked for the (ship) captain to come down and see me but they said he couldn’t speak (Filipino) so they sent the (crew member) and a Filipino as his interpreter. The Filipino was also with them,” he Manalo said.

Ubac said the vessel may have violated environmental laws when it dropped anchor off Lagadlarin, but the marine protected area has not been officially declared in writing so there was no legal basis to arrest the crew.

He said the crew intended to conduct underwater quarrying, particularly at the mouth of Lobo River, but they could not present any document for that.

According to Dimaano, there is a small mangrove forest close to the mouth of the river that is adjacent to his village’s own mangrove reserve.

Manalo said the ship’s anchor might have already damaged the sea grass, a breeding ground for fish and sea turtles.

“A basic and fundamental rule is they communicate with us. They prefer bullying. We don’t even allow our own fishing rafts to anchor there, how much more a foreign vessel?” he said.

Palace: We will verify

In Manila, presidential spokesperson Salvador Panelo said the military was now looking into the arrival of the ship.

“We will verify,” Panelo told reporters, adding that he had texted the head of the military’s Southern Luzon Command, whose area of operation includes Batangas.

The PCG spokesperson, Capt. Armand Balilo, tried to quell apprehensions about the vessel, saying it had a contract to dredge and desilt a 6.5-kilometer stretch of the Lobo River.

Balilo also said the ship had an importation clearance from the Maritime Industry Authority as well as an anchorage clearance issued by the Philippine Ports Authority. Its crew of nine Chinese nationals also hold valid visas.

Based on the environment compliance certificates issued by the Department of Environment and Natural Resources, the dredging operations will cover parts of the villages of Fabrica, Lagadlarin, Olo-Olo, Poblacion, Tayuman, Mabilog na Bundok and Nagtaluntong. —With reports from Lyn Rillon, Jovic Yee and Christine O. Avendaño