Bishop: Sacked Negros cops not involved in killing of 14 farmers 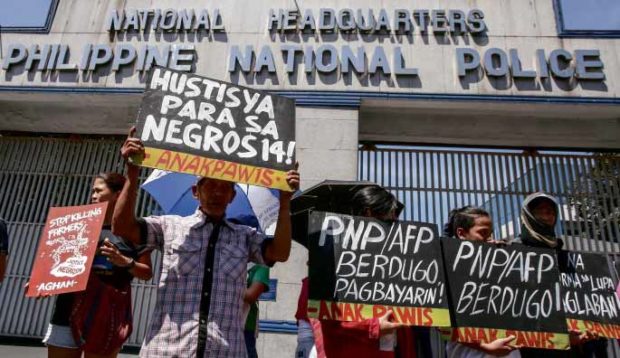 CRY FOR JUSTICE Members of the party-list group Anakpawis picket the Philippine National Police headquarters on Tuesday, demanding justice for 14 farmers killed by policemen in Negros Oriental on Saturday. Four police officials in the province have been relieved while the killings that happened during operations carried out by regional police are under investigation. —JAM STA. ROSA

CEBU CITY — The sacking on Tuesday of four Negros Oriental police officials over the killing of 14 farmers on Saturday came as a surprise to San Carlos Bishop Gerardo Alminaza, who said the four knew nothing about it.

Albayalde said he ordered the relief of the four police officials to clear the way for an “impartial investigation” by the PNP Internal Affairs Services of the killing of the farmers during simultaneous, military-backed police operations in Canlaon City, Manjuyod and Santa Catalina early on Saturday.

Alminaza, however, said on Tuesday that the four knew nothing about the police operations, because the raids were planned and carried out by the regional police.

“I’m surprised that they were the ones relieved [because] they didn’t even know of the plan and they were not directly involved. As far as I know, it was the regional police coming outside Negros. They [are the ones who should be] investigated and held accountable,” he said.

The force is based in Cebu City.

Sinas said on Tuesday that the relieved officials would be replaced by their deputies while they were confined at Camp Sergio Osmeña, headquarters of the regional police force.

Tacaca shrugged off his relief, saying it was intended to ensure an impartial investigation.

Alminaza said he was not impressed by the sackings.

“It won’t even console the widows and orphans or family members of their victims,” the bishop said.

“The loss of precious lives, especially if it could have been prevented or avoided, and is the result of a clear violation of human rights, whether perpetrated by our security forces or other armed groups, is always a cause of pain and deep sorrow, and could never be tolerated and would certainly cry for justice and reparation,” he said.

Eight farmers were shot dead in Canlaon City, four in Manjuyod and two in Santa Catalina early on Saturday in what the PNP called operations to serve search warrants for unlicensed firearms.

Police said the 14 were killed because they fought back.

They were members of or sympathizers of the communist New People’s Army (NPA), the authorities said.

The families of the victims denied the men were rebels and said they were unarmed and were shot inside their houses.

At PNP headquarters in Camp Crame, Quezon City, Albayalde told reporters that the relief of the four police officials was just procedural, not punishment, as he stood by the police claim that the officers involved in the operations acted in self-defense.

“It is an administrative relief to ensure that they will not be able to exert any influence in the ongoing investigation by the Internal Affairs Service and the Directorate for Investigation and Detective Management,” he said.

“The purpose of the fact-finding investigation is to determine whether there were any lapses in the series of police operations carried out by the local police units involved and whether or not the rules prescribed in the Revised Police Operations Procedures were properly observed,” Albayalde said.

He called the description of the killings as a massacre mere propaganda by leftists.

Earlier, Albayalde said some of the slain men were involved in NPA attacks on security forces in Negros Oriental.

The farmers’ group Kilusang Magbubukid ng Pilipinas, which counts some of the dead among its members, said the killings were carried out as part of the government’s counterinsurgency campaign.

Albayalde appealed to investigative bodies such as the Commission on Human Rights to be impartial in their investigation.

He gave assurance that the PNP would cooperate with investigators.

Sen. Panfilo Lacson, who was in Cebu City on Tuesday, said the policemen should be given a chance to prove the legitimacy of their operations.

“If there were excesses in the conduct of the operations or there were violations [of] the rules of engagement, then there is violation [of] human rights. [T]hen that is the time that the field officers should stop assisting these policemen,” Lacson, a former PNP chief, said. —WITH REPORTS FROM JAYMEE T. GAMIL, CARLA P. GOMEZ AND DALE ISRAEL