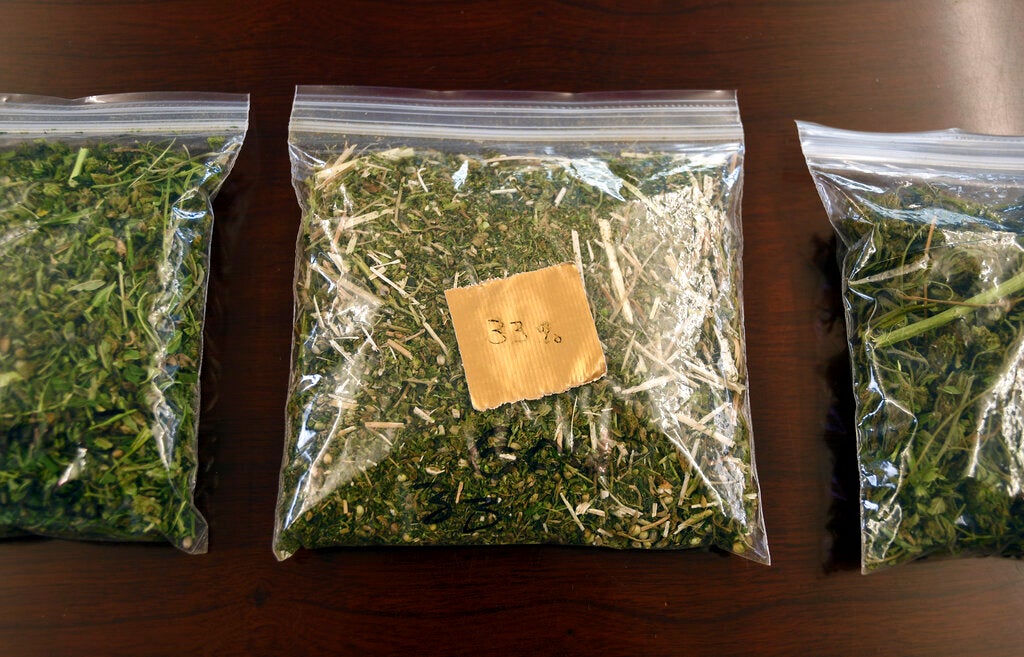 Samples of hemp sit on a table in the conference room at Andrew Ross’ office in Denver on Friday, March 22, 2019. Ross, a Marine who served in Afghanistan and Iraq, is facing 18 years to life in Oklahoma if he is convicted after he was arrested in January while providing security for a load of state-certified hemp from Kentucky. Federal legalization for hemp has created a quandary for police as authorities lack the technology to distinguish marijuana from agricultural hemp at a roadside stop. (AP Photo/Thomas Peipert)

PORTLAND, Oregon— Federal legalization of hemp arrived in the U.S. late last year and expanded an industry already booming because of the skyrocketing popularity of CBDs, a compound in hemp that many see as a health aid.

But now, just a few months after Congress placed the marijuana look-alike squarely in safe legal territory, the hemp industry has been unsettled by an unexpected development.

Truckers, now free to haul hemp from state to state, have been stopped and sometimes arrested by police who can’t tell whether they have intercepted a legal agricultural crop or the biggest marijuana bust of their careers. That’s because the only way to distinguish hemp and marijuana, which look and smell alike, is by measuring their tetrahydrocannabinol, or THC, and officers don’t have the testing technology to do so on the spot.

Marijuana, illegal under federal law , has enough THC to get users high. Hemp has almost none — 0.3 percent or less under U.S. government standards — yet drug-sniffing dogs will alert on both. Field tests that officers now use can detect THC but aren’t sophisticated enough to specify whether a shipment is legal hemp or low-grade illegal pot.

In a sign of the significance of the problem, the U.S. Drug Enforcement Administration earlier this month put out a request for information on private companies that might have the technology for field tests sensitive enough to distinguish between hemp and marijuana.

“Nobody wants to see someone in jail for a month for the wrong thing,” DEA spokeswoman Barbara Carreno said. “To enable us to do our job, we have to have something that can help us distinguish.”

It’s an unanticipated hiccup for the rapidly growing hemp industry, which relies on interstate trucking to transport hemp from farms to processing labs that extract the compound cannabidiol, or CBD, from the raw plant material. The pure CBD powder is then resold for use in everything from makeup to smoothies to pet food.

Kentucky and Oregon are big producers of hemp, and much of what they grow is processed in Colorado. Companies that transport the plant often drive through Oklahoma and Idaho, which is where some arrests have occurred.

Hemp remains illegal under Idaho law, and lawmakers there are scrambling to pass a legalization bill. Law enforcement agencies are urging them to include guidance on field tests.

To further complicate the issue, states that already have their own hemp programs must have them approved by the U.S. Department of Agriculture, which could take months.

“It’s the greatest example of the cart being put before the horse that I’ve ever thought of,” said Grant Loebs, who is on the board of directors of the Idaho Prosecuting Attorneys Association, which has demanded better testing. “You’re trying to make hemp legal so farmers can grow it, but you haven’t put into place anything that’s going to keep marijuana dealers from taking advantage of a huge loophole.”

At least three truckers and two security guards transporting state-certified hemp have been arrested and charged with felony drug trafficking. Thousands of pounds worth more than $2 million combined after processing remain in warehouses in Oklahoma and Idaho as evidence while the cases play out.

Frank Robison, a Colorado-based attorney specializing in such cases, said he has about a half-dozen clients in similar situations in other locations. He declined to provide more information, citing his clients’ desire for privacy.

“What local law enforcement is doing is they’re stifling an industry that Congress intended to promote to help American farmers and help the American economy — not to make people nervous that they’re going to get tossed in jail over a (THC) discrepancy,” said Robison, who represents one of the companies involved in the Oklahoma case.

Robison and others hope the USDA will work quickly to create rules for validating hemp shipments that local law enforcement could use instead of relying on THC field tests, such as state agricultural certificates or lab certificates. That way, police could let a suspicious load through without arrests and if the hemp samples come back high in THC from testing done in a lab setting, authorities could pursue the grower or shipper after the fact.

Andrew Ross, a Marine who served in Afghanistan and Iraq, is facing 18 years to life in Oklahoma if convicted after he was arrested in January while providing security for a load of state-certified hemp from Kentucky. Ross and a colleague were riding in a van behind a semi-truck filled with the plant that ran a red light and was pulled over.

Ross said he provided police in Pawhuska, Oklahoma, with the state-issued license for the Kentucky farm that grew the hemp, the license for the Colorado lab that was buying it and chemical analysis paperwork for all 60 sacks of hemp that he said shows it was within federal guidelines for hemp.

That wasn’t enough for the officers. They tested the shipment and found it contained THC — although not how much — and arrested Ross, his colleague and the two truck drivers.

The charges against the drivers eventually were dropped, but their 18,000-pound (8,165-kilogram) cargo with a value of nearly $1 million after processing still is being held.

The case and a similar one in Idaho prompted the Oregon Department of Agriculture to issue a formal warning to hemp growers not to ship their crop across state lines.

Ross posted bail and continues to run his hemp transport business, Patriot Shield Security, from Denver while awaiting trial in Oklahoma. He said potential customers from places like Nevada, West Virginia and Wyoming say they now are afraid to send their hemp out of state.

“The whole industry has been turned upside down. Everyone is terrified. No one wants to transport anything,” Ross said.

Osage County First Assistant District Attorney Michelle Bodine-Keely said the seized hemp was still being tested. Some samples sent to a DEA lab in Washington, D.C., came back within the legal range for THC, but several were over, she said.

Based on the results so far, Bodine-Keely said she’s not convinced it’s all hemp.

But, she allowed, “It would be nice to have a different kind of test in the field that will actually tell what the percent is.”