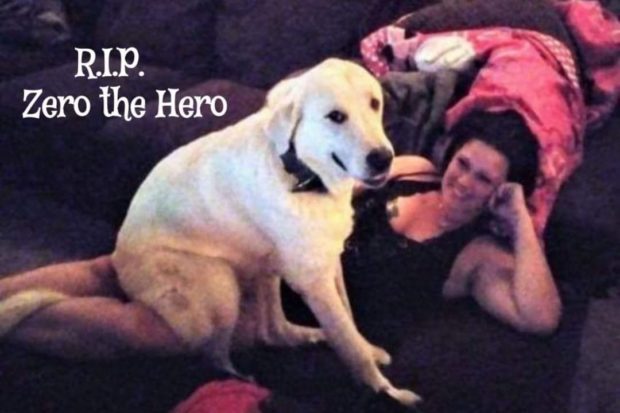 “R.I.P. Zero the Hero,” posts Laura Martinez as the Great Pyrenees passed away from saving the family from a shooter. Image: Laura Martinez/GoFundMe

A heroic dog died after saving his owners from an armed teenager who allegedly opened fire during a birthday party preparation, leaving three family members injured.

Seventeen-year-old Javian Castenada allegedly barged in a family’s home in Houston, Texas on March 9 and shot a mother Laura Martinez in the leg, son Taylor Hollier in the foot, and daughter Valerie Pace in the thigh and at the back near the spine, as Martinez detailed in a GoFundMe page.

In an attempt to save the family from the intruder, the family dog, a Great Pyrenees named Zero, attacked Castenada, knocking him down as he was firing. The dog, however, was shot in the chest.

The loyal pet, despite the hit, jumped on the shooter again, but was shot in the ear.

“Zero got back up — and I don’t know how, but he got shot again. Every time he got hit, he got back up again,” Martinez said in a report by Oxygen.com.

The family believes that the Great Pyrenees’ heroic act had saved them as his attack forced Castenada to lower his gun.

“Every time [Castenada] would go to aim [his gun], Zero would grab him and it would lower his shot. Say if he was aiming for the chest, his arm got pulled down to the leg.” she added. Unfortunately, after the third shot, the heroic dog was paralyzed.

Zero had to be euthanized as the veterinarians said that he could not be saved. Meanwhile, the family members are still recovering from the injuries which require surgical operations.

Martinez took to the fundraising platform GoFundMe to ask for donations for the hospital bills, including Zero’s euthanasia. The family aims to raise $40,000; since posting on March 12, they have raised $2,225.

Meanwhile, Castenada, who was a neighbor and acquaintance of the family, allegedly broke into the Martinez household the night before the incident and stole some belongings, including Taylor Hollier’s wallet.

Martinez identified the suspect from a Snapchat post of him wearing her son’s hat. She then went to his house to talk to his parents, but the armed teenager threatened them and showed up in the house where the incident happened.

The teenager turned himself into the police on March 18, after allegedly sending the family threats a day after the incident, the report said. The shooter was charged with three counts of aggravated assault with a deadly weapon.

Castenada’s lawyer, Sam Cammack III, denied the accusations and said that Castenada was attacked by the dog first, and he only acted in self-defense.

“They put that dog on that boy. These people have sensationalized like the dog was protecting the family,” Cammack was quoted as saying.

The family, on the other hand, is still mourning the loss of their dog. They have created a memorial for “Zero the hero” in the front lawn of their home. Casey Eridio/JB

Learning in time of COVID-19: Fiber optics, 5Mbps, P50 a month internet for every Gapan house