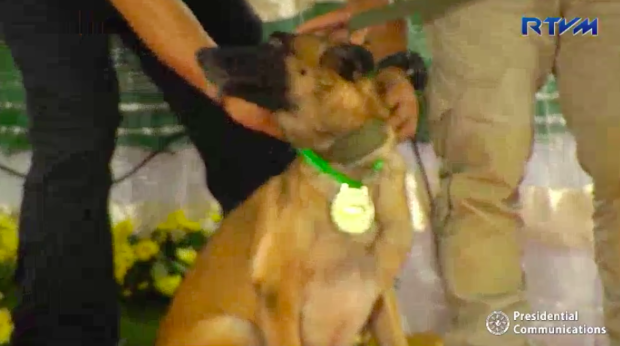 “Lala”, the Belgian Malinois who positively identified the presence of P3.4 billion worth of shabu concealed in two magnetic lifters at a Manila port on Aug. 7. is awarded with a medal. Screenshot from PDEA/RTVM live stream.

The Philippine Drug Enforcement Agency (PDEA) on Monday stood by man’s best friend in the case of the missing ton of “shabu” (crystal meth) reportedly smuggled into the country in July inside four magnetic lifters found last month in a Cavite warehouse.

Despite President Rodrigo Duterte’s assertion that the P6.8-billion shipment was “pure speculation” after the magnetic lifters tested negative for drugs, the PDEA gave the Medalya ng Papuri to 6-year-old Belgian Malinois “Odel” and his handler Ryan Collantes for sniffing out the missing drugs.

Thirteen other “hero dogs” were also cited for their “significant contribution to the [PDEA] in the fight against illegal drugs” at the awarding ceremony in Antipolo City.

They included Belgian Malinois “Lala” and “Tala” and their handlers Michael Vista and Wilfredo Benito, respectively, who positively identified the presence of P3.4 billion worth of shabu concealed in two magnetic lifters at a Manila port on Aug. 7.