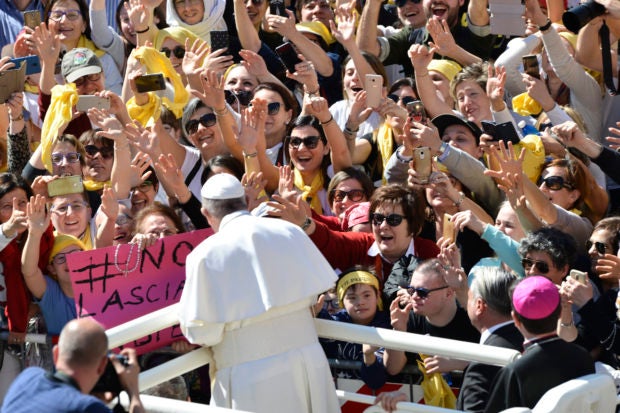 Faithful wave and reach out to Pope Francis upon his arrival at Loreto’s cathedral, central Italy, Monday, March 25, 2019. Francis has traveled to a major Italian pilgrimage site dedicated to the Virgin Mary to sign a new document dedicated to today’s youth. (AP Photo/Sandro Perozzi)

ROME – The Vatican official who negotiated a landmark agreement between the Holy See and China on bishop nominations said Monday that the path to normalizing Catholic life in the country “is still long” but that a new future is now possible.

Speaking in public for the first time since the accord was signed Sept. 22, Archbishop Claudio Maria Celli revealed details of his nearly four-decade-long effort to heal the rift with China while attending a book launch event.

Celli choked up at times, recalling the suffering he had seen while meeting with clandestine bishops, as well as the “profound suffering” of illegitimate bishops forced to accept episcopal consecration without papal consent.

Italian Premier Giuseppe Conte, fresh off a visit to Italy by Chinese President Xi Jinping and signing an agreement to support Beijing’s “Belt and Road” infrastructure initiative, also attended the book launch at the headquarters of the Italian Jesuit journal La Civilta Cattolica.

China’s estimated 12 million Catholics are split between those belonging to the government-backed Chinese Catholic Patriotic Association, which is outside the pope’s authority, and an underground church loyal to the pope.

Underground priests and parishioners are frequently detained and harassed.

The September deal was aimed at uniting the flock, regularizing the status of seven bishops who weren’t recognized by Rome and thawing decades of estrangement between China and the Vatican.

But some of China’s underground faithful have deep reservations about the deal, seeing it as a sell-out to the Communist government and a betrayal of their long loyalty to the pope.

Celli said he has no fears about the criticism that the deal sold out the underground church, saying, “I recognize there are positive elements for dialogue.”

“This provisional agreement is not just a point of arrival, but a point of departure for a more concrete and fruitful dialogue for both sides,” he said.

Celli, who also was the key negotiator in the Vatican’s Vietnam negotiations, said he began working on the China dossier in 1982, soon after the end of the Cultural Revolution.

In those years, China severed official relations with Vatican, which was “literally inundated” with letters from bishops and priests who survived crackdowns by officially atheist governments.

Celli said his first meeting with Beijing authorities, at the Chinese Embassy in Rome, was “not easy. The human rapport was tense, to say the least.”

A “limited sense of mutual trust” and poor communications impeded progress, which required a bridge to overcome the “rigidity of principles” on both sides, he said.

With the Sept. 22 agreement, which established protocols for nominating bishops going forward, “undoubtedly we have increased mutual trust,” Celli said.

“The path of normalizing the life of the church is still long,” he said, noting the difficulty of harmonizing a church that is both fully Catholic, and fully Chinese.

“Some would say I’m too optimistic,” Celli said. “I’ve never had illusions. But hope? Yes. I’m willing to welcome the surprise of the Lord, even in China.” /gsg