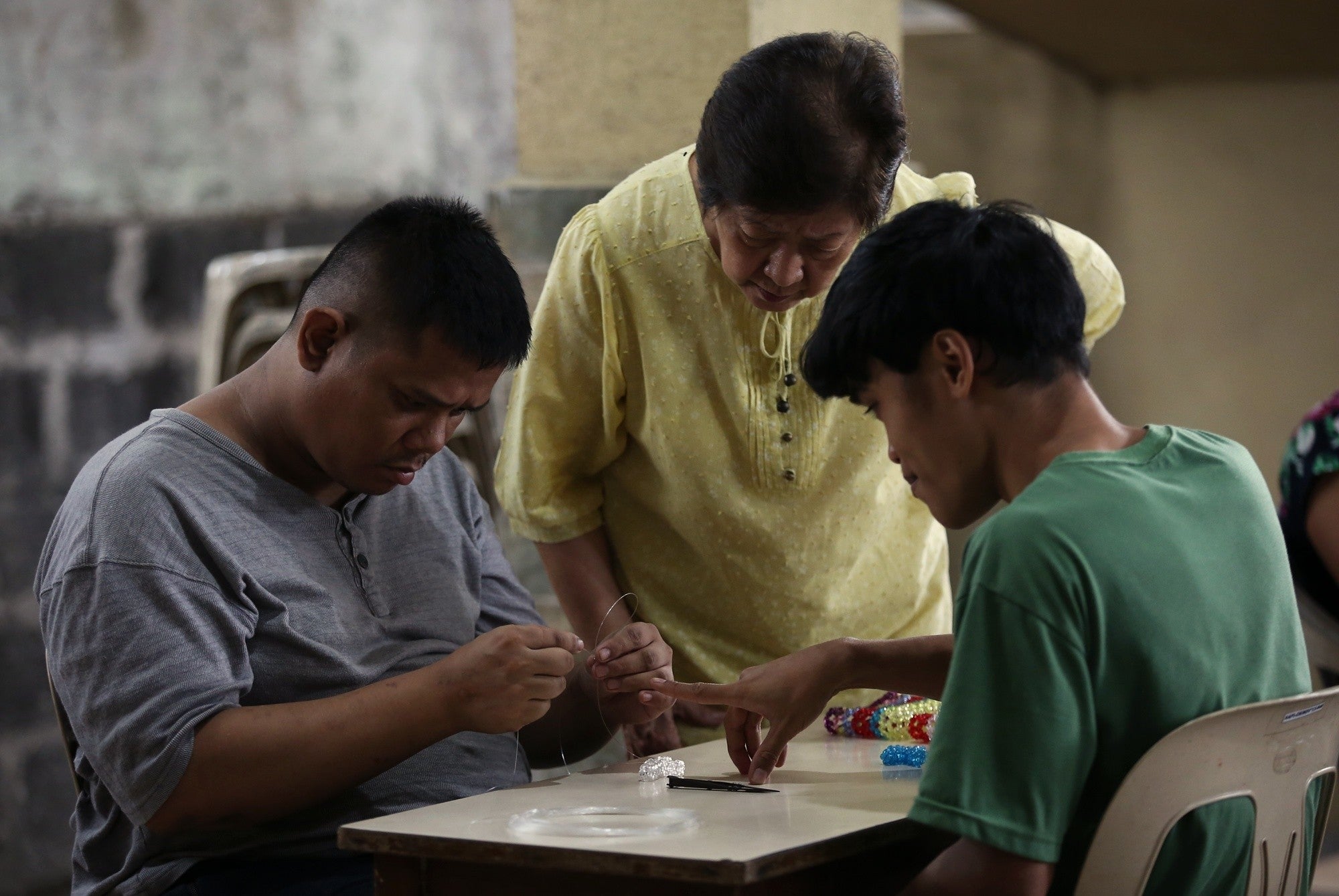 FOCUSED Francis (left), who has autism, makes a beaded cross under the close supervision of Arko chair Beatriz Florendo.

There is nothing that distinguishes Ang Arko ng Pilipinas (Arko) from the neighboring homes in Cainta, Rizal province, except perhaps for the invariable good cheer that greets visitors at the gate.

“Hi, good afternoon!” 33-year-old Rea chirps as she leads visitors into the compound where several residents can be seen cutting cogon grass that, one finds out, would later be used in making paper.

In another activity area, other residents are threading beads into a string to make what would become decorative touches on keychains and cell phone cases.

“This is what we do. What’s your name?” asks Rea, one of the residents sheltered by Arko, a haven for people with mental and physical disabilities, who have no known families.

Arko is the Philippine affiliate of L’Arche International, a federation of communities for mental handicaps. Founded in France in 1964, L’Arche has since expanded into a network that now includes 147 communities in 35 countries.

Arko was established in 1987 and started out in a two-bedroom apartment at Nagtahan in Sta. Mesa, Manila, with two core members and two assistants. Two years later, it moved to No. 116 Camia Street at Bayanihan Village, Cainta.

At present, Arko operates two shelters in the village—Biyaya and Munting Bukal—where core members and their assistants live. The organization also occupies a two-story building where workshops and classes are conducted, and where its offices are located.

“Core members” actually refer to the mentally handicapped persons adopted by Arko after verifying that they do not have relatives to look out for them.

Rea was brought to Arko in April 1999, seven months after her mother died. She was 13 at that time.

Another core member is Raymond, or “Mon-mon,” who at 45 is the eldest among the core members. Diagnosed with severe autism, he has been known to throw tantrums in his younger years whenever people rearranged the furniture in the house.

“He would throw books and run around the house. But when he got older, he would just start pacing in his room,” says Kristine Codod, Arko community leader.

His speech development has been stunted and he requires assistance when bathing and getting dressed. He helps out in some house chores, Codod adds.

When Raymond was turned over to Arko in 1988 by the Missionary Sisters of Charity, he had with him a piece of paper bearing only his name. His parents remain unknown. 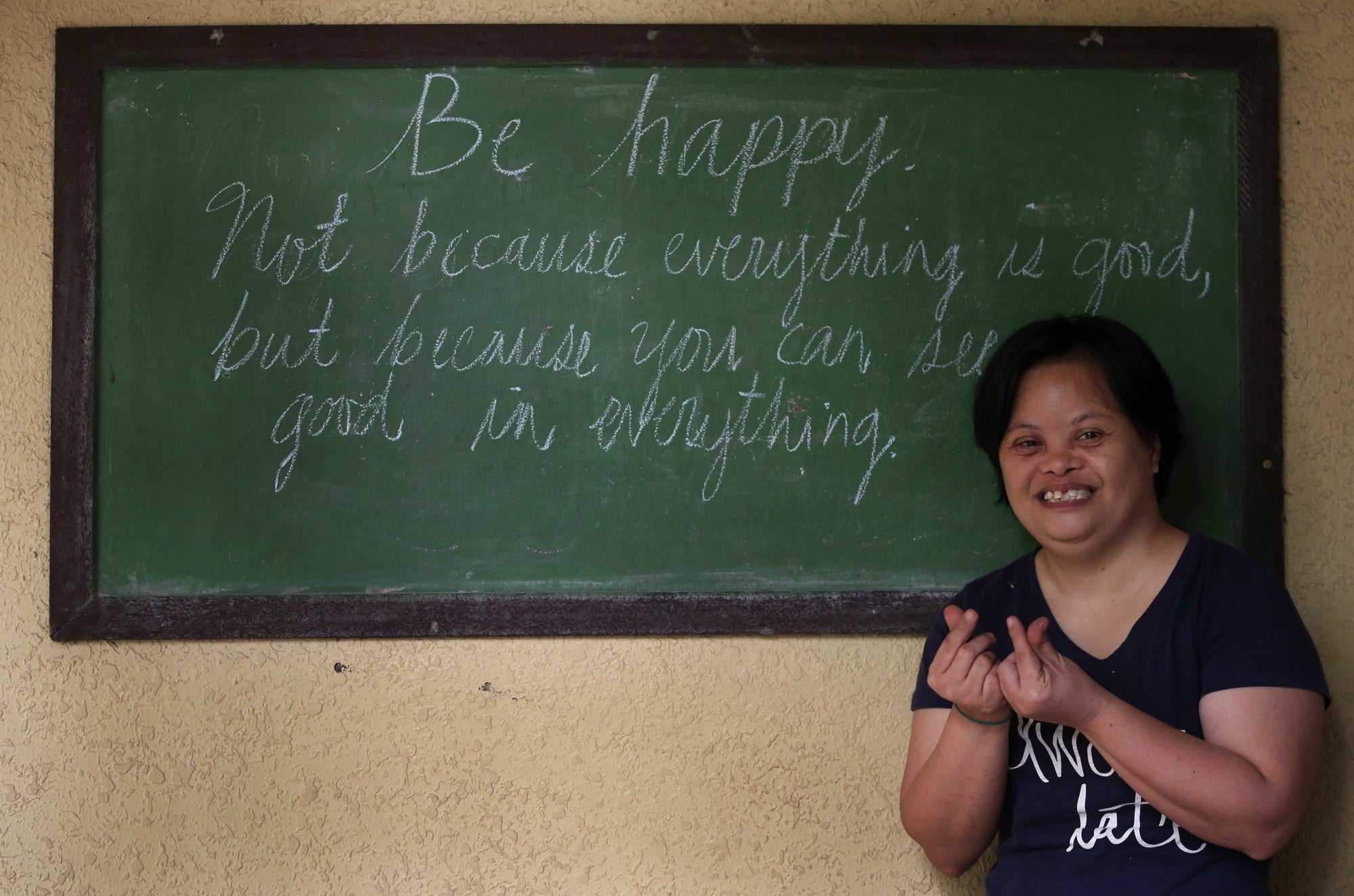 SPECIAL AND HAPPY Arko core member Lala Vicente, 42, lives up to the words posted on Arko’s board. —PHOTOS BY LYN RILLON

Accompanying residents in their activities while they lack in number, Arko’s longtime volunteers almost always have their hands full.

But it hardly matters for Rica Masakayan, a volunteer at 51, who felt that “with the blessings that I have received in life, if I have this extra time and talent (and) I can be of service to humanity, why not?”

According to 2016 data from the United Nations Children’s Rights and Emergency Relief Organization, there are about 1.8 million children in the Philippines who are “abandoned or neglected.”

They are the reason Veronica Santos has been an Arko volunteer for the last 15 years. “I joined as a day care teacher when the [core members] were much younger. That is what I want and what is important to these people [is to receive] help and guidance,” Santos says.

In special cases, that includes nursing support, which volunteers provide for Jordan, who can neither walk nor talk. Confined to a wheelchair due to cerebral palsy, Jordan also has difficulty swallowing. His meals should therefore be of a certain consistency, taken in manageable bites. He also rejects cold food.

“Jordan is a miracle to us,” Masakayan says. “When he was turned over to Arko, the nuns who brought him said,  ‘We just need him to stay in an institution that actually takes care of people like him … He’s not really going to live that long.’”

To keep its core members busy and give them a sense of worth, Arko engages them in various development activities, including art and dance workshops, as well as sessions on values formation and physical education. They are taught house chores on weekends; a task board tells them their assigned chores per day.

Despite the depth of the volunteers’ commitment, Masakayan admits that Arko still has to hurdle a major challenge: to be financially sustainable.

“We try to raise funds [for Arko] through projects like benefit concerts, but just how much can you get from those?” she says. “But these projects help people know more about the institution.” Masakayan added.

Fortunately, donations have been keeping Arko afloat, according to Codod.

When the Arko homes in Cainta were hit by floods and left without power supply in the wake of Tropical Storm “Ondoy” in 2009, neighbors, even those also affected by the calamity, were quick to share much-need supplies like rice and other food items for the sake of the core members.

But the shelter’s most enduring assets are its volunteers and assistants—and “we need more of them,” Codod notes.

Amid the challenges, Arko chair Beatriz Florendo maintains a positive outlook. “I know and believe that [Arko] is a community of angels. The core members are brothers and sisters in a very loving way. I have been nurtured and nourished by their simplicity, innocence, generosity and love for each other.”

Interested parties who wish to visit the shelter, volunteer or make a donation may contact Ang Arko ng Pilipinas at (632) 655-1482, or write at [email protected]