Duterte cancels appointment of Bello, 4 others as gov't peace negotiators | 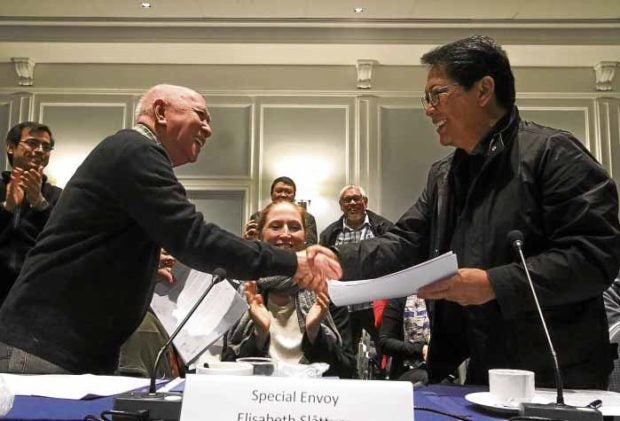 In this file photo, President Rodrigo Duterte’s chief negotiator, Labor Secretary Silvestre Bello III (right), and the head of the National Democratic Front of the Philippine’s peace panel, Fidel Agcaoili, seal with a handshake the supplemental guidelines to facilitate the processing of human rights complaints during the third round of talks in January 2017. (Photo by KARLOS MANLUPIG / Inquirer Mindanao-FILE)

MANILA, Philippines — President Rodrigo Duterte has terminated the appointment of government peace negotiators following the collapse of the peace talks with the communist rebels.

Duterte signed the termination paper of Labor Secretary Silvestre Bello III as Chairman of the government’s peace negotiating panel for talks with the Communist Party of the Philippines-New People’s Army-National Democratic Front (CPP-NPA-NDF).

The President signed un November 2017 Proclamation 360, termintaing the talks with the communist rebels.